The fiscal side of things, by Alex Otti 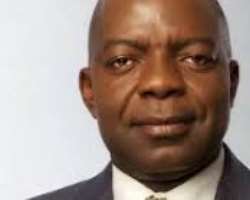 “We are moving towards a (complex) global economy. One way of approaching that is to pull the covers over your head. Another is to say: It may be more complicated- but that's the world I am going to live in, I might as well be good at it.” — Phil Condit

There can't be a better way to describe our country's current challenges than with the wise words of Phil Condit. It is a very complex and challenging economy that we are grappling with. But complex situations demand complex thinking and complex solutions. The easy way out like Condit aptly explains is to play the ostrich, hiding our heads in the sand and pretending that our entire body is covered when we all know that the rest of our body is exposed for the world to see. The rough and narrow route which is bound to produce better results is to gird our loins and take the bull by the horn, believing firmly that we can make lemonades out of the lemons that have been thrown at us. This option cannot happen by accident. It has to be a well-articulated and planned process and executed flawlessly by very brave and bold leadership. There may be some pain in the process, the pain may be severe, but must give way to sustainable gain in the final analysis.

A lot of attention has been paid on monetary policy in the recent times as we try to find our way out of the present economic challenges. Today, we intend to discuss fiscal policy as an instrument available to economic managers to help in navigating around our challenges and place us on a path of sustainable development.

Fiscal policy has been defined as the means by which a government adjusts its spending levels and tax rates to monitor and influence a nation's economy. It has been described as the sister strategy to monetary policy. Monetary policy being a strategy which central banks use to control money supply, interest and exchange rates. Fiscal policy therefore refers to the use of government revenue collection, mainly taxes and expenditure (spending) to influence the economy. Using fiscal policy, regulators aim to control inflation, reduce unemployment, control interest rates and stabilise business cycles. An economy in recession would benefit from fiscal policy if the government reduces tax rates to induce consumer spending because if people and businesses are paying less in taxes, they would have more money to spend and invest. The other alternative is for the government itself to increase its spending by investing more, say in infrastructure in the case of Nigeria. All things being equal, the additional spending by government would create jobs directly and indirectly thereby reducing the unemployment rate. Of course, economists have identified some drawbacks of the implementation of fiscal policy but both policies (fiscal and monetary) are indispensable in rescuing a struggling economy, maintaining a strong economy or cooling off an overheated economy. What separates one government from another is the extent of their understanding of the right policy mix to achieve desired macroeconomic results of price stability, credit availability, financial stability and economic growth.

There seems to be an agreement that given the economic recession that the country is experiencing the government needs to adopt a fiscal stimulus package to resolve the issue. At least, there is no better way to support this view than to point readers' attention to the fact that the N6.08 trillion budget for 2016 provided for a deficit of over N2 trillion. This was approved by the National Assembly earlier in the year. What is, however, an issue is the speed with which the implementation is being handled. As we approach the end of the year, activities seem to just be taking off at a very slow speed, threatening the chances that the benefits of the stimulus would be enjoyed in this financial year. Be that as it may, we want to devote the rest of the discussion to taxes. Generally, our tax administration has been very inefficient.

My belief is that because government has access to cheap oil money, it has not considered it expedient to improve the administration of taxes in the country. So, when we join others to refer to tax payer's money, some of us cringe and ask, which tax payer's money? The standard measure for tax collection is to compare what component of the GDP is accounted for by taxes. This is referred to as tax to GDP ratio. This measure is important not just for purposes of understanding how efficient the tax collection system is, but also to show the level of real economic activities in the country. The assumption is that it is only that part of the population that is employed, and that part of businesses that is making profits that would pay taxes. Because one cannot give what one doesn't have, it is not expected that the unemployed or businesses that are at the verge of extinction would pay taxes to government.

PWC in an extensive study provides answers as to why the situation is this way in Nigeria. Out of the over 180 million Nigerians, and a labour workforce of 77 million people, only about 10 million are registered for personal income tax across all the states of the federation. Out of this number, 46% are registered in Lagos. That explains why Lagos accounted for 40% (N268bn) of the total taxes (N684bn) collected by all the states in 2015. While only about 13% of the labour force pays some form of personal income tax, only about 12% pays VAT. Corporate income tax faces the same fate as only about 10% of companies file tax returns and we know that some of them are very good students of Donald Trump.

According to PWC, the low level of tax compliance has to do with incoherent fiscal policies, cumbersome and inefficient tax administration system, high level of tax evasion, ambiguities in tax laws and lack of transparency regarding the utilisation of tax revenue for social services and visible development. The result of a survey they carried out is very interesting. 70% of the people surveyed claimed they do not pay tax because they do not see tax payer's money at work, over 22% said it was because of unclear tax rules and complex compliance process while over 7% said it was due to poor enforcement by tax authorities. None of the respondents said it was due to people being poor or not being aware, the survey concluded.

Like I had indicated earlier, I believe the reason why government has not given its best to tax administration is because of the fact that it has come to rely heavily on oil revenue as the major, if not the only source of revenue and therefore sees tax collection as a minor irritant. Like we can see today, this may have been true in the past but definitely no more. Given that government has not been collecting much from the populace, it has also denied itself the use of this very important instrument for the management of the economy. From our analyses earlier, governments use fiscal policy of tax and spending to stabilise the economy. But not when the taxes were not being collected in the first instance.

Another unfortunate fallout is that the social contract between the rulers and the ruled cannot be enforced. The ruled do not feel they can hold the rulers to account because it cannot in all honesty, talk about tax payer's money. The rulers don't also feel compelled to deliver on the contract because they are not spending tax payer's money in the real sense of it. That is probably why our power infrastructure was left to collapse, our roads and rail networks were left to decay, and our educational and health care delivery system have become a disaster amongst several others. If truly, government was dependent on tax payer's money, it would be more interested in the wellbeing and survival of the tax payers, knowing very well that if anything happens to any of them, government revenue would be negatively affected.

The opportunity presented by the current economic recession is useful for government to completely restructure how it does things. It is an opportunity that should not be wasted. Government should start with proper documentation of the populace. We must digitally map the country so we know where everyone is. Everyone should have a tax payer's identification number once they are of age. All the information should be in a central database accessible by different government agencies. Tax administration should be made very simple and straight forward and be made part of our culture.

It has also been reported that the current system is very complex and cumbersome and keeps away those that would have qualified as 'voluntarily compliant'. In an annual report, “Paying Taxes 2016”, jointly issued by PWC and World Bank, Nigeria was rated no 181 out of the 189 countries measured along the lines of the ease of paying taxes. We were only better than eight countries in the whole world. This is a clear signal of how bad things are here with respect to paying taxes. It is sad that our system is hostile to even those who want to pay us money. We must take a serious look at the entire tax administration system to make it friendlier and more efficient.

Legislation and enforcement cannot be overemphasised in the reform journey. To encourage voluntary compliance, the law must not only make it a criminal offence to evade tax, but it must also be enforced. Awareness and education would follow to ensure that more people are brought into the tax net while government would also be required to be more transparent and responsible in the use of tax payer's money.

We must begin to make the transition to funding public expenditure with tax payer's money not with profit made by government from participating in business. This way, when government officials spend our money, they know they owe us explanations. When government is dealing with the taxpayer, it knows, it has to treat him as the one that pays the piper and should, therefore, dictate the tune. Even others living off tax payers, including those on benefits would realise that their life is dependent on the magnanimity of the tax payer.

As I conclude, I'd like to share a joke someone sent me: “My Income tax return form was rejected because my response to the question, 'number of dependants' was 2.1million illegal immigrants, 900,000 criminals in over 85 prisons and above all 769 idiots in parliament. They said it was not an acceptable answer! I'm still wondering… Who the hell did I miss out?”