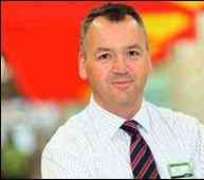 A former store manager with Asda has been appointed chief executive of the supermarket group.

Andy Clarke, 46, who joined the company in 1992, takes over with immediate effect, it has been announced.

He replaces Andy Bond, who is now chairman of Asda, which is part of the US retail giant Wal-Mart.

Mr Clarke, who moves up after three years as chief operating officer, takes over at a time of intense competition in the supermarket sector.

Wal-Mart said in a statement that Mr Clarke “knows the company, our colleagues and he cares about our customers. He is the ideal person for the job and this will be a seamless leadership change.”

Although Asda recently reported record results for 2009, with like-for-like sales up 6%, its market share has slipped due to strong competition in the UK.

Mr Clarke's priority will be to implement Asda's declared strategy to become the market leader in general merchandise and the clear number two in food.

Mr Clarke, married with three children, began his Asda career as a store manager in Edinburgh before taking on director roles in frozen food, bakery and produce.

He left the company for senior positions at Matalan and Iceland before returning as retail director in 2005.