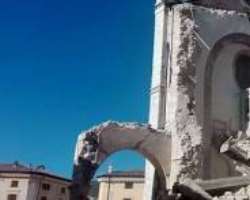 Italian towns hit by a 6.6 magnitude earthquake have been warned they could be hit by a “domino effect” of aftershocks.

People were pulled from the rubble in towns across central Italy and 20 were injured after buildings collapsed when the earthquake hit “like a bomb” at 7.40am local time on Sunday.

It struck at the heart of a region already struggling to rebuild after being devastated by a series of quakes, including one in August that left 298 people dead and two massive tremors four days ago.

The magnitude was recorded by the US Geological Service at 6.6, with a depth of 10km, and if that stands, it would make it the most powerful earthquake to hit the country in 36 years.

Residents have been warned of a series of powerful aftershocks, which could continue “indefinitely”.

Seismologist Gianluca Valensise, of Italy’s National Institute for Geophysics and Vulcanology, said the quake that struck three miles north of the town of Norcia, near Perugia, in the Umbria region had a “geodynamic link” to the one in August.

He said the seismic activity could resemble events in the south of the country in 1783 when area suffered five major quakes measuring greater than 6.5 magnitude in two months.

In Norcia nuns and monks fled into the street as a cathedral and a church, which had been left standing after the recent earthquakes, crumbled during morning worship.

They joined residents to pray in the town square where a firefighter appealed to the priest to keep panicking residents calm, saying: “We have to keep people calm. Prayer can help. I don’t want people to go searching for family members.”

The Monks of Norcia said the 14th century Basilica of St Benedict had been “flattened” in the quake. Some knelt in the rubble of the landmark, which attracts 50,000 pilgrims each year, deeply upset by the loss of the building they tended.

The quake was felt as far away as Rome
In Rome, more than 100 miles away, cracks appeared in buildings and the underground train network was shut for structural checks.

Around 1,300 people in the Umbria and Marche regions – where serious damage has been seen – had already fled to the coast after being struck four days ago by a 6.1 magnitude and 5.5 magnitude earthquake.

Crumbling walls around Saint Anthony Church
Those who had not left had been sleeping in their cars. One of them was the Mayor of Ussita, Marco Rinaldi. He said: “Everything collapsed. I can see columns of smoke, it’s a disaster, a disaster.

Rescuers confirmed that a handful of farmers and elderly people who had refused to leave the small village of Casali after last week’s strikes had been found and they were considering forcing them to move out. – Sky News.