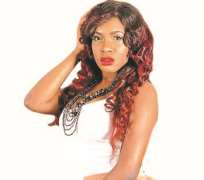 The actress' marriage to Ebireri had come under heavy storm of accusations and counter accusations of infidelity, insubordination and domestic violence before it finally collapsed in 2013. Now, the Anambra State-born movie star is all set to give marriage a second chance.

In an exclusive chat with Inside Nollywood, Ike talks glowingly about the special man in her life and plans for remarriage. 'Marriage is a beautiful institution. I will never talk down on marriage because it's something I still look forward to. It's what every woman hopes for. Though, I'm focused on my career right now, I do have a very special person in my life,' she enthuses.

When pressed further to reveal the identity of the man that tickles her heart, Ike whose latest movie, Miss Teacher is making waves in the cinemas, refused further talk about him.

'Well, that's all I can say about my relationship; I have a special someone. His profile doesn't matter to you right now,' she quips.

But is Chika Ike a fulfilled woman despite her fame and fortune? Hear her: 'Honestly, I am not fulfilled yet. There are certain things I haven't achieved. Every day I wake up, I want to get to the zenith of my career, but it takes one step at a time. I am still hoping to achieve more which would eventually make me a fulfilled woman.'