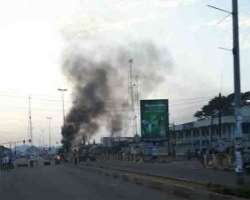 People of Ondo State on Friday spews out to the streets to protest against  the declaration of Mr. Jimoh Ibrahim as the candidate of the Peoples Democratic Party in the Ondo governorship election.

The protesters, who came out in their large numbers, were chanting solidarity songs, while asking the Independent National Electoral Commission to reverse its action.

INEC had on Thursday removed the name of Mr. Eyitayo Jegede from the list of the candidates of the political parties that would participate in the November 26 governorship election and replaced it with Ibrahim's name as the candidate of the PDP.

The protests which began at about 7 am on Friday were staged in Akure, the state capital, Owo, Ondo and Ore towns while protesters set bonfires at many major roads in the towns.

They were staged in major roads like Oyemekun, Oba Adesida, Arakale, Araromi among others were barricaded halting vehicular movement.

During the protest, both social and business activities were paralysed while banks and some other corporate and commercial  offices could not open on time for business.

Officers and men of the Ondo State Police Command were also present at major streets of the town to maintain the law and order.

He later told State House correspondents that he decided to visit the Presidential Villa, Abuja to intimate the President of the imminent danger in the decision which he described as injustice to the people of the state.

The governor, according to a report by The Punch,  admitted that he was shocked because the development had no basis in law or politics.

“I am shocked. In logic, in law, in politics, there is no basis for this decision whatsoever,” the governor said.

He explained that the court order upon which the INEC based its decision was about zonal and state executives of the PDP and was not about the 2016 election.

While saying that Ibrahim and Eyitayo Jegede were not parties to the suit,  the governor said the INEC initially took the right decision by making it clear that it was not state or zonal executive that was empowered by the Electoral Act to conduct election.

According to the report, the governor  while the INEC and security agencies monitored the party's primary elections that produced Jegede in Akure, Ibrahim decided to hold his primary in Ibadan, the Oyo State capital when there was no threat to peace in Akure. Mimiko said his camp would have disregarded the Justice Okon Abang's judgement  that ordered INEC to recognise Ibrahim but for an information given to him that the commission would only act on the last order on the matter.

Based on this, he said his camp appealed the judgement, saying the notice of appeal should naturally have served as a stay of execution.

He said they therefore approached the court and got two orders mandating INEC not to replace Jegede's name.

According to him, while one of the judgements was served on the commission at about 10am on Thursday, the other was served at about 3pm.

He added, “Only around 7 or 8 pm (on Thursday), we got to know that INEC for no justifiable reason had substituted the name of Jegede and replaced it with that of Ibrahim.

“The question to ask is on whose order has INEC done that?

“Apart from the fact that we have two restraining orders on INEC, the commission knows fully well that Jimoh Ibrahim's primaries was in Ibadan.

“There was no report by security agencies that the security situation in Ondo State warranted the movement of the primaries to Ibadan or anywhere outside the state for that matter.

“Under inec guidelines, the time for substitution of candidates has even elapsed.”

Mimiko said he decided to meet Buhari to inform him that the INEC's decision had the potential of setting the state on fire.

He said, “This action potentially can cause a breach of peace. In Ondo State in the last seven and half years, we have done everything possible to put good governance on the table and promote peace.

“We see this action as potentially dangerous. It can cause conflagration in the state and that is why as the Chief Security Officer of the state, I have come to alert Mr. President of the potential danger of this injustice so that we can nip it in the bud.”

He said Buhari had assured him that he would look into the issue with a view to ensuring that where there is injustice, it would be rectified.