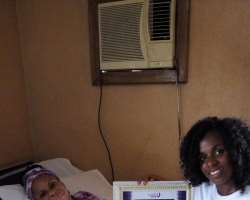 It was a relieving moment for Aisha Edward the coordinator of Association of Persons Living with Sickle Cell Disorder as she received Executives of Nigeria Students’ Leadership Forum who were on a visit to present her an Award of Excellence in Youth Empowerment and Entrepreneurship.

Speaking during the visit, The Founder and President of NSLF Prince Echem, said it was necessary for his organization to appreciate and reward persons who have empowered youths in various capacities.

He further said, that the visit has availed him the opportunity of meeting Aisha Edward, whom he has always heard of and has always appreciated her exploits especially in the sickle cell sensitization campaigns.

Blossom Emechebe, an On Air Personality and CEO of Chocolate Magazine, who accompanied Echem to the presentation, said that when the name of the sickle cell coordinator came up during nominations, she was so delighted that at least people are beginning to recognise worthy efforts, as she confirmed that Aisha is a lady that has empowered hundreds of youths through her sickle cell association.

She urged other ladies to emulate the good works of the sickle cell Campaigner.

It is pertinent to note that, Aisha had missed the award ceremony during the weekend due to her severe health conditions that warranted her being hospitalized and her absence at the epoch event, where the organizers took a paradigm shift in pageantry by towing the line of grooming entrepreneur queens through various skill acquisitions organized by UNESCO and APTECH.

However, the organizers deemed Aisha worthy to still present the award to her in her hospital bed after the main event.

Receiving the award, Aisha appreciated the organizers for their kind thoughts in recognizing the sickle cell campaigns, and promised to never relent in the fight that she has already started. She also urged other budding entrepreneurs to develop more creative ways of reaching out to the youths just like NSLF has done, as Youth empowerment might be the only route out of the current impediment of the country. She continued by throwing her support to the organization, as she looks forward to collaborating with them in championing the sickle cell fight.