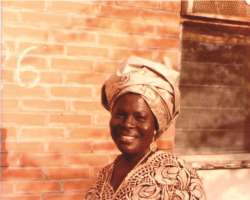 Presbyterian Church Elder, Chief Mrs. Dorcas Ndukwe Onum, the mother of the former chairman of the African Union Advisory Board on Corruption and ex-member of the ICPC Board, Dame Julie Nne Nwariaku, has died at the age 94 in her hometown, Asaga Ohafia in Abia state.

Elder Dorcas, the matriarch of the Onum family, was the first surviving twin in Ohafia and was the widow of Elder I. N. Onum, a retired federal civil servant. Among her sons also is the first Political Editor of The Punch, Mr. Nduka Onum.

In the days when twins and their mothers were cast out in Ohafia, Chief Missionaries of the Presbyterian Church rescued young Onum, then raised and trained her.

Mrs. Onum lived with her husband and family in Kaduna and Umuahia until her retirement to her Asaga home after the Nigerian civil war.

She was a famous weaver of the colourful 'popo' cloth in Umuahia and took to farming on retirement. She was a leader and activist in many church, women and social organizations in Umuahia and Ohafia.

She is survived by her children, Dame Julie Nwariaku (a retired permanent secretary), Chief O.A. Ndukwe (a maritime entrepreneur and director of RANGK Company) Nduka Onum (veteran journalist and first political editor of the Punch) and Mrs. Egu Mgbonye (a retired newspaper administrator), and grandchildren and great-grandchildren.