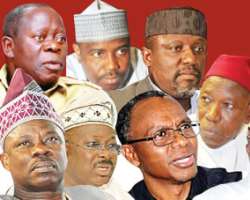 Governors elected on the platform of the All Progressives Congress on Monday protested against alleged lopsidedness in the appointments so far made by President Muhammadu Buhari, especially the ambassadorial nominees who were named last week.

This was one of the issues raised by the governors at a meeting they had with Buhari behind closed doors at the Presidential Villa, Abuja.

The Plateau State Governor, Mr. Simon Lalung, confirmed this to State House correspondents at the end of the meeting.

ï¿¼Lalung said the President had asked that state governors who have complaints should put them in writing while promising to look into them.

'Part of the issue we also raised was on some of the appointments that were made. So all the states that had complaints are going to put it in writing and the President promised he is going to look into it,' he said.

Specifically on the ambassadorial nominee from his state, Paulen Tallen, who has rejected her nomination, Lalung said the rejection was not only about her husband's ill-health as she claimed.

He said the rejection had more to do on the need for all zones in the state to be treated fairly in terms of federal appointments.

The governor said, 'The rejection is not only about her (Tallen's) husband. I think it is the dimension of Plateau politics because I had already made complaints to Mr. President that appointments should not be concentrated in one zone.

'All these appointments came again from that particular zone.

'The complaints that are coming from our state is not about her own personal interest, it is the fact that two ambassadorial appointments are coming from the same zone that we had complained about. That is my zone.

Lalung said as a matured politician, Tallen stepped down as a sacrifice for the people of the state.

He said while working on a replacement, the state had appealed to the President to be fair to all.