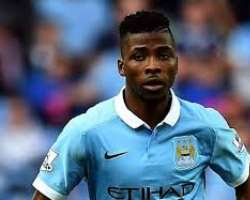 Manchester City returned to the top of the Premier League with a 1-1 draw at home to Southampton on Sunday, although the performance again raised question marks over the title credentials of Pep Guardiola's team after a fifth consecutive game without a victory.

Kelechi Iheanacho's eighth goal in his last 11 league games cancelled out Nathan Redmond's first-half opener for Southampton, which owed much to an extraordinary mistrake by City defender John Stones.

City, after winning their first 10 games under Spanish coach Guardiola, have suffered a major dip in form.

Guardiola had spoken passionately in the wake of the midweek 4-0 defeat at former club Barcelona about his desire to stick to his footballing philosophy.

Those beliefs, however, must have been sorely tested in a first half in which his side failed to test Fraser Forster in the Southampton goal and fell behind to the visitors.

The Saints went ahead in the 27th minute following a disastrous back pass from England centre-half Stones, who nonchalantly laid the ball back into the City penalty area despite the presence of Redmond.

The forward retained his composure, beating Vincent Kompany to the ball and rounding Claudio Bravo before converting into the open net.

Following Bravo's costly defensive slip in the midweek Champions League tie, it was another blow to Guardiola and a handful of home supporters booed the team off at the interval.

For all their defensive problems, however, City were equally ineffective at the other end in the first half — their best effort coming when Stones had a 31st-minute effort ruled out for offside.

The defender appeared to have made amends for his earlier error when he headed home Kevin De Bruyne's free-kick only for referee Mark Clattenburg to rule it out — a decision which replays suggested was harsh.

An early David Silva cross was easily picked out by Forster, Ilkay Gundogan shot just wide from the edge of the area and Raheem Sterling drilled a shot way off target.

Instead, the Saints looked more likely to score, particularly on the break, with Dusan Tadic testing Bravo with an early cross-shot.

Guardiola wasted no time in altering his tactics at the interval, with Iheanacho replacing De Bruyne who was clearly still below peak form following a recent injury lay-off.

The situation might have worsened for City in the opening exchanges after the break when Aleksandar Kolarov was booked for a body check on Charlie Austin as the Southampton striker attempted to chase a through ball.

Moments later, Iheanacho equalised after a flowing move exposed gaps in Southampton's defence with passes from Fernandinho and Leroy Sane allowing the young Nigerian to sweep in a confident finish from six yards.

City's passing, so inconsistent in the first half, had also improved markedly and a concerted attack ended with Sterling finding Iheanacho who turned and centred for Silva, only for a deflection off a defender to save the Saints.

After 68 minutes, the increasingly effective Gundogan worked his way through midfield, via a series of give-and-gos, before seeing Forster keep out his low drive with a one-handed diving stop.

Silva also found himself in space in the Southampton area, producing a near-post shot which Forster blocked with a solid parry.

But there were also warning signs for Guardiola, notably in the 74th minute when Sofiane Boufal found Austin in space in the City area only for his shot to be well saved by Bravo.

Aguero also twice came close, first with a stooping, off-target header and then with a determined run and a low shot which flashed across the face of goal. – AFP.