By The Star Online 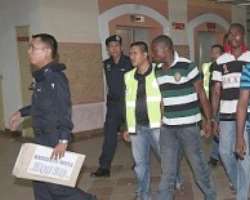 FIVE Nigerian men with student visas have been arrested in connection with the murder of an African man in Taman Cendana, Sungai Chua, Malaysia.

Police chief Asst Comm Othman Nanyan said a resident of the housing area alerted the authorities of the incident at the back lane of Jalan Cendana 3 at about 8.30pm Friday.

“We believe that the victim died after he was attacked with machetes.

“A witness told us that three men had chased the victim and hacked him with machetes.

“We recovered two of the weapons from a drain and another some 10m away from the victim.

“A Hyundai Elantra, believed to be the victim’s car, was parked some 100m away,” he said.

ACP Othman said the body, believed to be African, had no identification.