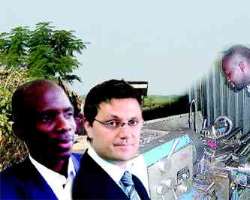 Adewonise & Kudsee
The growth of an economy depends on the contribution of all sectors particularly the small and medium scale enterprises.

However, in this part of the world, the idea of how to establish a business concern is not a major issue because everybody seems to have that in abundance.

But what could be said to be lacking is the ingenuity to sustain it in such a way that the business will not only thrive but also expand.

Finance experts contend that one of the best ways to achieve business growth, most especially in this part of the world where conditions on loans for small-scale business owners are too stringent to be met, is through retained earnings.

Retained earnings, according to investopeadia-an online financial dictionary, is the percentage of net earnings not paid out as dividend but retained by the company to be reinvested in its core business or to pay debt.

It goes on to explain that in most cases, companies retain their earnings in order to invest them into areas where they can create growth opportunities, such as buying new machinery and opening new branches.

It can also be used for carrying out more research and development for the purpose of consumer satisfaction and market penetration.

However, experts point out that though the culture of ploughing back profit holds the light for the survival of small-scale business operators, many businesses in Nigeria are yet to adopt this strategy.

This situation, according to them, is responsible for the collapse of small businesses no sooner than take off.

The small and medium scale enterprises has provided employment for an estimated 60 per cent of the Nigerian workforce, thus making the sector the highest employer of labour.

The sector has not only created employment, it has also performed other vital roles which include adding value to the economy; accelerating rural development; stimulating entrepreneurship; mobilising private savings; harnessing them for productive purposes; and contributing to domestic capital formation.

The importance of the sector has made successive administrations to put in place various policies with a view to fast-tracking development, setting the pace for industrialisation of the Nigerian economy; increasing access to credit and creating employment opportunities.

Most of these, according to finance experts, have not achieved the desired result.

According to a Business Development expert, Mr. Oluyinka Adewonise, 'Nigerian small business owners are yet to explore the economic benefits of retained profits. This ignorance has led to the voluntary winding up of many businesses and has also retarded the transformation of others into big businesses.'

He says that since capital is the soul of any business, entrepreneurs need to consider how to increase it while setting up or expanding existing one.

Apart from the fact that small-scale business owners may not be able to meet the loan conditions of banks, Adewonise contends that the associated costs attached to banking loans readily make the option unpopular to small scale entrepreneurs.

This, according to him, explains why internal source of funding is prominent among small-scale business owners in Nigeria.

He says, 'The culture of ploughing back profit as a means of engendering business growth is the easiest and most reliable form of sourcing for funds internally. To achieve this, business owners must adopt a principle known in accounting as the entity concept. This concept stipulates that a business is separate and distinct from its owners.

'It is this principle that will enable a businessman to reinvest part of his profit for growth and expansion rather than consuming it.'

He, however, frowns at the growth rate of small scale businesses in the country, which he described as being marginally small because operators in the sector are unable to detach themselves from their businesses.

This situation, according to him, has been largely responsible for some of their collapse.

Also speaking on the imperative of retained earnings, the Dean, School of Productivity, Mr. Remi Dairo, says the concept is not popular among small-scale operators beecause of the pervading level of poverty ravaging the country.

He notes that most people go into businesses for their daily survival rather than the intent of growth, adding that their level of consumption is very high in relation to their savings.

He also contends that most entrepreneurs depend on their business earnings for their daily survival rather than their own earnings in the business in form of wages and salaries.

'With this kind of business concept, the chances of expansion are usually limited,' he adds.