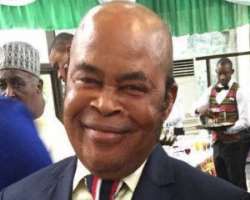 The All Progressives Congress (APC) in Ekiti State has lampooned Justice Sylvester Ungwuta of the Supreme Court over claim that the Minister of Transportation, Rotimi Amaechi, and his Science and Technology counterpart, Ogbonnaya Onu, allegedly tried to influence him to remove People's Democratic Party governors; Ekiti State's Ayodele Fayose, Rivers' Nyesom Wike and their Ebonyi counterpart, Dave Umahi, in the election petitions appeals before the justices of the Supreme Court.

It said refusal or failure to report to the right quarters the alleged crime to subvert justice is a betrayal of his oath of office, which the justice took to preserve the integrity of the judiciary to ensure justice.

The DSS had last week raided the homes of Justices Ungwuta and John Inyang Okoro, making startling revelations on the cash in local and foreign currencies discovered as alleged proceeds of bribes to influence judgements in election matters.

For Ungwuta, he alleged that he was being victimised by the Federal Government for his refusal to help APC leaders, Amaechi and Onu, to influence election petitions judgments in Ekiti, Rivers and Ebonyi states.

But reacting to the allegations in a statement in Ado-Ekiti by Publicity Secretary, Taiwo Olatunbosun, the party said that defending the allegations by the justices several months after the alleged bribery attempt was committed was an afterthought and "ridiculous betrayal of their oath of office" for them to keep that serious alleged attempts to subvert justice in their closets until the justices were allegedly caught in acts that betrayed their oath of office.

The party lampooned the justices for behaving in the same pattern in the defence of the allegations against them, saying that besides the "laughable theatrics that these justices are serving Nigerians", their actions were "drama acted out of the script" .

"The question is; if you want to report fraud to the CJN, why reporting after you had already taken your action and not before taking that action?

"And following Justice Okoro in the same pattern, Justice Ungwuta is now alleging in a letter to the Chief Justice of Nigeria, Mahmoud Mohammed, dated October 18, 2016 that DSS agents planted cash in foreign and local currencies in his house to implicate him for corruption after the media had earlier reported the same Justice as having allegedly claimed that he made the money discovered in his house in rice and palm oil trade.

"Apparently rattled by responses of Nigerians, who cackled and scorned the justice over that disingenuous petulant alibi, the story has now ridiculously changed to allegation that DSS agents planted millions in local and foreign currencies in his house six days after the alleged declaration that money saved from palm oil and rice was found in his house and not bribe money."

He added: "Ekiti State election petition case was decided on April 14, 2015, but Justice Ungwuta had to wait for about one and half years before it occurred to him that he had to report to the CJN on an alleged attempt to bribe him to influence the case.

"This is a comedy acted out of script and therefore a melodrama, and we never knew that comedians of Baba Suwe and Baba Sala variety also exist in Nigerian judiciary to entertain Nigerians with this ridiculous and grotesque portraiture of what justice means to some judges in our apex court.

"We find it rather strange that Justice Ungwuta who claimed guns were pointed at him menacingly found it very convenient to doze off intermittently at the same time, yet was able to account for the minutest details of what happened in his house and we wonder whether those guns were friendly guns.

"More curious is that he admitted that the men produced a search warrant, but of judge of many decades experience did not ask any question on the search warrant and he did not know that he was being questioned by DSS until he got to their office.

"The macabre dance of Justice Ungwunta and his colleagues in trying to put up a weak defence has questioned their integrity as ministers in the temple of justice. They should realise they can never be a judge in their own case and are not above the law."

Olatunbosun added that by his latest gaffe, Justice Ungwuta had inadvertently revealed the reason why against all Judicial norms he and his colleagues granted Fayose a relief he didn't seek concerning his impeachment.

He added: "Justice Ungwuta also forgot to expose Amaechi six months ago when the EFCC invited him and his colleagues over allegation of corruption and also forgot to expose Amaechi since April 14, 2015 after he and his colleagues delivered the strange judgment on Ekiti election when they generously awarded reliefs not sought by Fayose in the case before the Supreme Court.

"In a nutshell, the allegations by these justices of the Supreme Court are better told to drunken marines and not intelligent Nigerians who are victims of injustice in the hands of bad eggs in Nigerian courts in their callous dispensation of injustice to helpless Nigerians.