Nigeria is fifth most unstable country in the world: Report 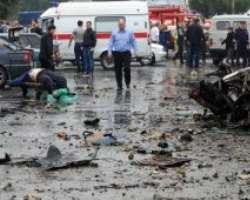 As George W. Bush and Al Gore debated prior to the 2000 elections, neither Iraq nor Afghanistan merited serious mention. Eight years later, neither Barack Obama nor John McCain foresaw chaos in Syria and Libya.

Political science is heavy on the political and light on science. Area studies specialists failed to predict the Islamic Revolution in Iran, the fall of the Soviet Union, or the Arab Spring.

Policymakers are much more comfortable second-guessing what they saw in the rearview mirror than gazing over the horizon.

Simply put, the world is unpredictable and the chief concerns for the next administration might be barely a blip on the radar today.

Putting aside existing conflicts in Libya, Syria, Yemen, the South China Sea and Ukraine, what crises could blindside the White House in the next four years?  Here are ten countries and potential crises that should certainly be on the next administration's radar screen: 1. The Maldives.

Let's start small. Few Americans know the Maldives, but those who do likely think of the low-lying Indian Ocean archipelago as the archetypal tropical island paradise .

Outside of the gated resorts, however, Islamist radicalism has been taking root. The Maldivian government has sought US assistance, but the 3 a.m. phone call has now been ringing unanswered for several years. Might ISIS seize Western tourists on the island? What would a radical government willing to accept arms and foreign jihadis mean for trans-Indian Ocean shipping ?

The Maldives might be isolated and far from US shores but isn't that what analysts once said of Afghanistan? 2. Mauritania.

Africa has largely been a success story over the past 20 years, but several countries put that progress at risk. Take Mauritania, for example.

European terror analysts regularly list Mauritania as perhaps their top, under-the-radar concern. The impoverished country on the Atlantic coast of Africa has the population of Phoenix, Arizona, spread over an area twice the size of California.

An Islamic Republic, it is one of the last countries to embrace slavery in practice if not in law. Its largely ungoverned interior has become the domain of smugglers and a safe-haven for terrorists. Loose weaponry from Libya has only poured fuel on the fire.

In many ways, Mauritania has become pre-9/11 Afghanistan , just without the diplomatic attention. 3. Algeria.

Africa's largest country, Algeria should also be one of its wealthiest. But decades of military rule, statist economic policies, and a devastating civil war in the 1990s have taken their toll.

Now, southern Algeria is a haven for Al Qaeda in the Islamic Maghreb. Ailing President Abdelaziz Bouteflika, Algeria's long-time strongman, will likely not last out the next four years . There is no clear succession and, even if a president does consolidate political control, he will have to face down Islamic radicals who might seek to avenge their long suppression.

One Libya has been destabilizing enough. Another so close to Europe could herald disaster. 4. Ethiopia.

Two and a half times the size of California, Ethiopia is one of the world's oldest countries but, despite an increasingly autocratic and repressive leadership projecting an aura of stability, it looks like it could be among the world's most fragile states. While the economy has grown rapidly, poverty remains the rule as the population also booms.

The agricultural basis of the economy makes Ethiopia susceptible to drought. State-dominated industries mean it competes poorly with the outside world. The country is incredibly diverse. In 1991, Eritrea successfully seceded after a decades-long civil war. While Eritrea had its own colonial heritage, many other ethnic groups are as resentful of Addis Ababa's control and, specifically, ethnic Tigrean domination.

Of greater concern, however, is Ethiopia's sectarian division. Muslims already represent a third of the population and are growing at a faster rate than the Ethiopian Christian population. Should ethnic and sectarian divisions erupt into open conflict, the resulting insecurity could make Somalia look like Club Med. 5. Nigeria.

Concerns about stability in Nigeria, Africa's most populous country, hit international headlines in 2014 when Boko Haram kidnapped hundreds of school girls in order to convert them forcibly to Islam and marry them off to militants. But that's only one of many problems Nigeria faces.

Boko Haram has thrived against the backdrop of endemic corruption. By some estimates, Nigeria has lost $400 billion to embezzlement and corruption since 1960, more than total international aid to Africa during the same period.

While the international community has largely eradicated piracy off the coast of Somalia, the problem has skyrocketed in the Gulf of Guinea , and even that is underreported since states don't always report seizures in their territorial waters.

Like Ethiopia, Nigeria faces not only ethnic but sectarian divisions. Tensions between Muslims and Christians plunged the Ivory Coast into civil war in the last decade; Nigeria is far more volatile.

If its fragile democracy fails, West Africa may see a conflict worse than any it has seen in decades. 6. Turkey.

What would it mean if a NATO ally collapsed? Over the past decade, President Recep Tayyip Erdoğan has seized dictatorial power. He called the aborted July 15 coup “a gift from God” and used it as an excuse to declare a state of emergency and purge more than 100,000 military officers and civil servants.

But there are indications that there could be more violence on the horizon . Doğu Perinçek, a former Maoist turned ultra-nationalist power-broker, leads a shadowy group Turks simply refer to as “the Perinçek group.”

Some suggest that Perinçek is Turkey's real defense minister, behind-the-scenes. In August, Erdoğan hired Adnan Tanriverdi, a former Special Forces trainer close to Perinçek, to be counsel for the president.

Simply put, Erdoğan is a marked man and even if he is killed or forcibly removed, he has so eviscerated the Turkish state that political chaos will likely follow his death. A Norwegian surveillance aircraft photo shows Russian aircraft carrier Admiral Kuznetsov off the coast of Northern Norway on October 17, 2016. Michael Rubin asks whether as Muslims make up a growing proportion of the conscript-age population, Russia can count on its own army in any sectarian conflict. 333 SQUADRON, NORWEGIAN ROYAL AIRFORCE/NTB SCANPIX/HANDOUT VIA REUTERS 7. Russia.

Like Turkey, Russia is ruled by a strongman who has substituted the illusion of stability for its substance. When President Vladimir Putin dies, the Russian people will have to pay the price for his decades of corruption and mismanagement.

Putin's lasting legacy will be the vacuum of power underneath him. Beyond poor governance, however, Russia will soon face reverberation from its demographic crisis. Its Muslim population is growing as its ethnic Russian population shrinks. At the same time, it faces Islamist radicalism not only in Chechnya and Daghestan, but also increasingly among ethnic Tartars.

Here's the question: As Muslims make up a growing proportion of the conscript-age population, can Russia count on its own army in any sectarian conflict? (On all these issues, the writings of Leon Aron and Anna Borshchevskaya are must-reads). 8. Saudi Arabia.

Saudi Arabia's facing a perfect storm : US policy has empowered and re-resourced Iran. The price of oil has declined precipitously pushing the Saudi economy to the brink. Saudi Arabia is bogged down in a war in Yemen which seemingly has no end.

All of this would be bad in the best of circumstances, but add into the mix a king that very well may have Alzheimer's and the Kingdom may face a crisis unlike any it has faced in decades.

Every US administration since Franklin Roosevelt's has counted on a strong partnership with Saudi Arabia kingdom to bring stability to the Middle East and order to the world economy. If Riyadh is unable or unwilling to continue that partnership, can Washington find a substitute or fill the gap? 9. Jordan.

Even more than Saudi Arabia, the United States has relied on Jordan for generations. The Hashemite Kingdom is perhaps America's closest Arab ally. But Jordan is in crisis today , even if the Jordanian government will not admit it.

With the influx of Syrians, Jordan has now absorbed its third major wave of refugees, putting tremendous strain on the economy. King Abdullah II is far more popular in Washington and London than he is in some corners of his own kingdom. And while Western journalists depict Queen Rania as a romantic and popular figure , she is widely disliked inside Jordan for her profligate spending.

All of this has created fertile ground for ISIS to infiltrate Jordan even if it keeps its presence low-key. Should the United States and its Iraqi and Kurdish allies push ISIS out of Iraq and Syria and lead more of its fighters to enter Jordan, then the assault on Mosul and Raqqa might truly be Pyrrhic. 10. China.

Last but not least China, the world's most populous country. Some pundits have watched China's economic boom and sung its praises , even suggesting that the communist republic's dictatorial ways might be superior to those of the United States.

Economic development is uneven: coastal, urban incomes are exponentially higher than interior, rural incomes. The legacy of decades of China's murderous one-child policy are still to come as China faces a demographic precipice. My colleagues Dan Blumenthal and Derek Scissors highlight the implications of stagnation in China.

Simply put, future US administrations should worry less about the rise of China and more about its decline. Will a faltering China, for example, lash out militarily as a stagnating Russia has?

The world is a dangerous place. These scenarios may be too obscure for the 2016 presidential debates, but ensuring the ability of the United States to react to them should not be.

Michael Rubin is a former Pentagon official whose major research areas are the Middle East, Turkey, Iran and diplomacy. He instructs senior military officers deploying to the Middle East and Afghanistan on regional politics, and teaches classes regarding Iran, terrorism and Arab politics on board deploying U.S. aircraft carriers. Rubin has lived in post-revolution Iran, Yemen and both pre- and post-war Iraq, and he spent time with the Taliban before 9/11. His book Dancing With the Devil: The Perils of Engaging Rogue Regimes examines a half-century of U.S. diplomacy with rogue regimes and extremist groups.

Culled from Newsweek. This article first appeared on the American Enterprise Institute site.