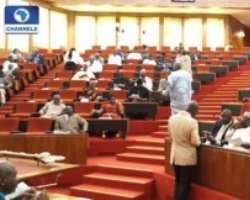 The Senate warned yesterday, that if the Federal Government, through its agencies saddled with the management of the aviation sector failed to take urgent steps to address issues in the industry, Nigeria would likely experience plane crashes.

The warning is coming barely 10 years after the country experienced a spate of fatal plane crashes.

According to the Senate, it has become imperative to fix the ailing aviation industry.

It also noted that the current monetary policy of government was choking and crippling operators of the aviation industry.

The Senate has asked the Federal Government to prevail on the Federal Airport Authority of Nigeria, FAAN, to insist that airlines operating in the country use the Naira as the official currency in all transactions in the aviation industry, rather than the use of foreign currencies, especially the dollarsï¿¼.

The upper chambers also urged the Federal Government to ensure that it extracted from airlines which will be benefiting from the government special reviews, commitments not to increase fares arbitrarily and guarantee competitive ticket pricing within the regional market indicators.

The Senate also expressed its willingness to support Federal Government's move to intervene in the current challenges to save the travelling public from more hardship and reduce the suffering in the aviation sector.

The warning and resolutions of the Senate were sequel to a motion sponsored by Senator Dino Melaye, APC, Kogi West, titled Disturbing Developments in the Nigerian Aviation Industry.

In his contribution to the motion, Senate Minority Leader, Senator Godswill Akpabio, who raised the alarm of imminent crashes, said airlines operating in the country could no longer access foreign exchange used in servicing their fleet of aircraft.

Senator Akpabio, who warned that some operators might start cutting corners because of their inability to access foreign exchange, which would lead to endangering the lives of air travelers, stressed that many of the airlines in the country were bankrupt and dead.

According to him, many of them have either withdrawn or relocated to neighbouring countries.

'Section 14(2) of the 1999 Constitution as amended says that government must ensure the security and welfare of the people.

''We are likely to have a spectre of crashes because most airlines cannot access foreign exchange to service their aircraft.

In his remarks, Deputy President of the Senate, Senator Ike Ekweremadu, who noted that the withdrawal of airlines from Nigeria's aviation industry was a bad omen for Nigeria, said if urgent step was not taken, there also might be loss of jobs.

Ekweremadu said: 'A situation where airlines cannot send back their money to their home countries is a disaster. Competition becomes less and the few left will charge as they want. It is embarrassing that airlines have to go and refuel in Ghana.'

Earlier in his presentation, Senator Dino Melaye said: 'Senate notes with sadness the emerging challenges bedeviling the aviation industry as a result of the current economic recession where airlines like United Airlines, Iberia Airline, Emirate and the Kenya Airlines have either suspended or about to withdraw their operations in the country.

'Disturbed that the implication of the current crisis is set to further make matters worse for the ordinary traveling Nigerians who are already being considerably burdened over the current economic challenges we are facing.

'Observes that the problem of this airlines moving to withdraw their services from Nigeria has been partly as a result of their inability to repatriate their funds and meet with their operational obligations;

'Observes that the implications of this development is grave in terms of its impact on our job creation policy, investment drive and economic recovery plans;

'Notes with gladness the current steps being taken by government to use its policy directives to ameliorate the problems in order to forestall the collapse of the industry, including concessions and special arrangements to enable the airlines operate in a more conducive atmosphere.

'Observes further that government must put the welfare of the Nigerian citizen foremost in its negotiations with the affected airlines;

'Notes also that government must begin to put in place a more lasting and sustainable programme of intervention and policy direction that will put the industry back in the course of growth.' - Vanguard.