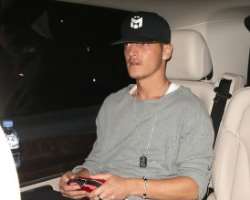 The German international, who's spectacular volley against Swansea helped the Gunners go joint top of the Premier League alongside Manchester City, partied into the early hours at London's Tape nightclub. The World Cup winner was later spotted leaving the nightclub’s premises around 3am – the same club which earlier in the evening had welcomed pop sensation Justin Bieber. Bieber is currently in London as part of his Purpose world tour, with a series of gigs at the O2 Arena.