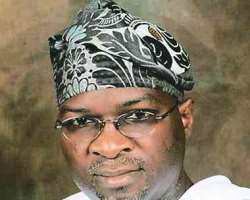 Lagos State Governor elect, Ba
The Lagos State House of Assembly on Monday directed the state Attorney-General and Commissioner for Justice, Mr. Olasupo Shasore (SAN) to appear before it on Tuesday (today).

The Assembly is asking the Lagos AG to answer to questions relating to a letter he sent to the House on the invitation extended to the state Ministries, Departments and Agencies by the Assembly's seven-man Ad-hoc committee set up to probe the allegations of financial impropriety levelled against Governor Babatunde Fashola by a group, The True Face of Lagos.

In a letter dated May 7, and read to the House by the Clerk, Shasore said he received a letter from the law firm of Bamidele Aturu and Co, the lawyer to Richard Akinnola on the matter.

Akinnola had instituted legal action against the Assembly on the propriety of the probe.

Shasore added that from the content of the letter, it was clear that the appellant had appealed against part of the judgment delivered on the case by Justice Habeeb Abiru of the Lagos State High Court in Ikorodu on March 16, 2010 and cited the lawyer's question on the power of the House to conduct 'investigation' by committee pursuant of Section 128 of the Constitution.

The letter which was obtained by our correspondent titled ''Re: seven-man Ad-hoc committee on the allegation of financial impropriety levelled against the administration of his Excellency Babatunde Fashola,' reads in part, 'The implication of the foregoing legal steps taken by the appellant is that the defendant and the seven-man Ad-hoc committee having been notified of the appeal and the pending application for injunction , is precluded from proceeding with any investigation or taking any other step that may foist upon a situation of complete helplessness and hopelessness on the appellate court. Having regard to the foregoing, I advise that the seven-man Ad-hoc committee should await the outcome of the appeal and the motion before the court of Appeal. I have advised all Ministries, Departments and Agencies of the Lagos State Government that they are under a legal duty not to acquiesce in actions that may undermine the process before the Court of Appeal.'

But in their reactions, some members of the House said the letter of the AG was an affront on the legality of the House.

On his part, the chairman of the committee and Deputy Majority leader, Dr. Ajibayo Adeyeye (Kosofe 11), urged the House to write the AG on the matter even as he drew the attention of members to the implication Shasore's advice to MDAs as stated in the letter.

In his contribution, the Majority leader, Mr. Musibau Taiwo( Ajeromi (Ifelodun 1),said that the action of the AG was disappointing , saying he had set a precedent that the House needed to be wary of.

The Speaker, Mr. Adeyemi Ikuforiji, traced the genesis of the whole issue and stated the steps taken before the House set up the new committee.

He said, 'Akinnola later came and approached the court to stop the probe for some loopholes in what the House had embarked upon. Upon the decision of the court, the House decided to dissolve the committee. Later, the same group brought a petition and we then decided to set up another committee. If Akinnola or whoever went back to the Court of Appeal…There is no law or commonsense that stops the House from investigating financial allegation against the governor.

'The AG got it all wrong. It leaves a very bad taste in the House. It will be illegal to allow the rule of law to be subverted.'