Beseeching The Sultan, CAN President, Bishop Kukah, Others To Intervene In Pogrom of Shia Muslims 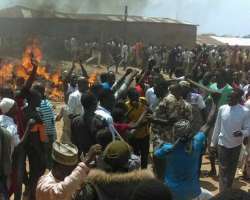 This is an urgent and desperate call to the religious leaders of Nigeria and abroad to intervene in the pogrom against Shia Muslims in the north especially Kaduna that is spiraling out of hand.

We beg all religious leaders to please weigh in to protect lives of believers, prevent continued destruction of schools, homes and other properties and ensure the freedom of religion in Nigeria.

At various times different ethnic and religious groups have come under persecution, oppression and repression. And as Quran 2:191 says, "Oppression is worse than murder." We must not wait until it is our minority that is under attack before we act. And we must know that while we may be in a majority here or today, in other places and at other times our "group" may be the minority. If not for God, for ourselves, our children and those like us in other areas, we must act when the weak are oppressed and killed.

We must all come together and pray.
Psalm 10: (NET Bible) 12 Rise up, Lord! O God, strike him down! Do not forget the oppressed! 13 Why does the wicked man reject God? He says to himself, “You will not hold me accountable.” 14 You have taken notice, for you always see one who inflicts pain and suffering. The unfortunate victim entrusts his cause to you; you deliver the fatherless. 15 Break the arm of the wicked and evil man! Hold him accountable for his wicked deeds, which he thought you would not discover. 16 The Lord rules forever! The nations are driven out of his land. 17 Lord, you have heard the request of the oppressed; you make them feel secure because you listen to their prayer. 18 You defend the fatherless and oppressed, so that mere mortals may no longer terrorize them.

Vindicate the weak and fatherless; Do justice to the afflicted and destitute. Rescue the weak and needy; Deliver them out of the hand of the wicked. (Psalm 82:3-4)

But we must also act.
James 2:20 reminds us: "Faith without works is dead."

Again the Quran says what means, "O you who have believed, be persistently standing firm in justice, witnesses for Allah , even if it be against yourselves or parents and relatives. Whether one is rich or poor, Allah is more worthy of both. So follow not [personal] inclination, lest you not be just. And if you distort [your testimony] or refuse [to give it], then indeed Allah is ever, with what you do, Acquainted." (Quran 4:135)

[They are] those who have been evicted from their homes without right - only because they say, "Our Lord is Allah ." And were it not that Allah checks the people, some by means of others, there would have been demolished monasteries, churches, synagogues, and mosques in which the name of Allah is much mentioned.. And Allah will surely support those who support Him. Indeed, Allah is Powerful and Exalted in Might. (Quran 22:40)

Acting comes first. But when we cannot act then at least we must speak out. It is silent in Nigeria as the oppression continues. This is how it was silent for too long as Boko Haram bombed more and more Churches every Sunday till they attacked everyone and all infrastructure and livelihood and took the nation 20 years backward. The intolerance of some of us and whoever among us including religious leaders who promote this must come to an end in Nigeria. These leaders need to be arrested along with the youth. Governors must be held to account for promoting injustice in their states in violation of the constitution and their sworn pledges to secure life.

While we thank the Almighty that the Shia Muslim victims remain patient in the face of oppression; if their millions decided to fight back, Nigeria may not be able to contain the results. Our army may not have the bullets to kill them all even if the government gave such order.

It may be us tomorrow, but even if it won't ever be us, we must yet act. This is our duty as human beings and believers in God.