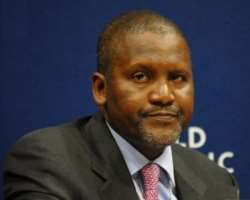 Dangote Industries Limited (DIL) has completed the acquisition of Twister B.V, a company headquartered in the Netherlands.

The acquisition is meant to compliment  DIL's portfolio of investments in the upstream, midstream, and downstream segments of the Oil & Gas sector.

The company, which delivers reliable, high-yield and robust solutions in natural gas processing and separation to the upstream and midstream oil and gas sectors, will help design and build the gas plants which would be critical in processing gas from oil fields for transportation via  Dangote's planned sub-sea pipeline (EWOGGS) for ultimate consumption by various industries and power plants.

Its unique separation capabilities are designed for augmenting production and streamlining processes, and, to capitalise on high-yield gas processing for maximising revenues.

The Twister B.V. used to be owned by Shell Technology Ventures Fund 1 before its recent acquisition by DIL together with its partner – First E&P.

Based on sophisticated patented technology, Twister gas plants are typically cheaper to build and operate compared to alternative technologies, and also deliver better performance levels. The company has customers in Nigeria, Malaysia, and South America.

Speaking on the new acquisition, Aliko Dangote, President and CEO of Dangote Industries Limited said it “was an important acquisition for us. Twister's cutting edge gas processing technology is fundamental to delivering our strategy to unlock about 3 bcfd of gas in order to meet Nigeria's gas needs.”

Twister's CEO, John Young said “We are delighted in the confidence DIL and First E&P have shown in Twister to be their core provider of gas separation solutions.  After a very thorough due diligence, our technology has been recognised as a key enabler to reduce gas project costs which is crucial in this current environment. We are excited to be part of the Dangote family of companies.'

It would be recalled that the refinery and fertilizer projects of Dangote Industries Limited is reported to have the capacity of creating a minimum of 235,000 new jobs, both direct and indirect jobs, as it becomes operational in the first quarter of 2019.

President of Dangote Group, Aliko Dangote, who revealed this recently, also stated that the projects would cost a minimum of $17 billion.

Dangote said the $12 billion refinery would have a capacity of 650,000 barrels a day. He assured that there will be market for the refined products because even in Africa, only three countries have effective functioning refinery with others importing from abroad.

Dangote named the countries with refinery as Egypt, South Africa and Cote d'Ivoire, saying “Our refinery will be ready in the first quarter of 2019. Mechanical completion will be end of 2018 but we will start producing in 2019.”

When the projects fully take off in 2019, Dangote said it would help the country save $5 billion spent on the importation of oil into the country.

He explained that the project with the $2 billion fertilizer unit was the funded through loans, export credit agencies and our own equity.