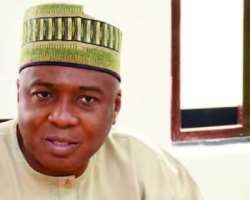 An aide to the President of the Senate, Bukola Saraki, on Friday said his boss had been vindicated by the recent outburst of President Muhammadu Buhari's wife, Aisha, about her husband's leadership.

Bamikole Omisore, a media aide to the Senate President said the fact that Mrs. Buhari could come out to openly express reservations about her husband's appointees showed that his boss' earlier argument that the government had been hijacked was in good faith.

Mr. Saraki on June 27 said some individuals within Mr. Buhari's government were running a 'government within the government'.

'It has become clear that there is a government within the government of President Buhari who have seized apparatus of executive powers to pursue their nefarious agenda,' Mr. Saraki said at the time.

Mr. Buhari pushed back against the comments, describing them as a figment of Mr. Saraki's imagination.

But in an interview with the BBC, Mrs. Buhari appeared to agree with Mr. Saraki's position.

She criticised her husband's choices of cabinet members and heads of agencies.

The first lady said her husband packed his cabinet with people he barely knew, suggesting that the government had been hijacked.

She also said she might not support her husband's re-election if the president failed to shake up his cabinet.

Mr. Omisore said in a tweet on Friday morning that Mrs. Buhari's comment came 'months apart' from Mr. Saraki's own complaint about 'the same thing'.

Mr. Omisore said Mr. Buhari and those who criticised Mr. Saraki at the time he made the comments should understand that both the president's wife and his principal meant well for the administration.

'Aisha Buhari and Bukola Saraki both have the best interest of President Buhari at heart,' Mr. Omisore said in the tweet.

Mr. Omisore further expanded on his principal's position in a telephone interview with PREMIUM TIMES on Friday morning, saying Mr. Saraki still strongly believes that Mr. Buhari had been sidelined by a few men in his government.

'It is true that we still believe that there's a government within the government.'

'We do believe that the president has good intention and we're behind him,' Mr. Omisore said. 'But a situation where a few people are in charge does not bode well for the image and the future of our country.'

Mr. Omisore said recent development in which the Minister of Finance openly disagreed with the Governor of Central Bank on economic matters clearly showed that administration officials were taking directives from conflicting authorities.

'It shows that people are getting directives from different authorities,' Mr. Omisore said.

Mr. Omisore said Nigerians should pay attention to Mrs. Buhari's statement because she's a mother for the whole country.

'Mrs. Buhari is our mother and she has come out to say that the way things are being run, where APC manifesto has been abandoned and the party completely left out of governance, should not continue for too long,' Mr. Omisore said.

Mr. Saraki has been facing corruption charges at the Code of Conduct Bureau since September 2015.

He was also arraigned alongside his deputy, Ike Ekweremadu, in a separate case in which they were accused of forgery in the Senate.

The government withdrew the case a few days ago.
Mrs. Buhari's explosive interview rattled the presidency so much that PREMIUM TIMES authoritatively gathered that the officials there pressured the BBC to step down the remaining part of the interview.

BBC, however, vowed to run the full exchange as scheduled. – Premium Times.