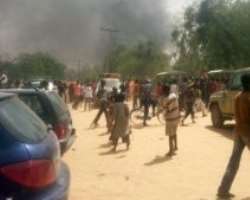 About eight people were killed and 15 wounded when a car laden with explosives hit a taxi in northeastern Borno state’s capital of Maiduguri, birthplace of a seven-year-old Islamist insurgency, military and medical sources said.

Five people were inside the taxi in a convoy to Gamboru, a town near the Cameroon border, police said in a statement. Cars in Borno state often travel in convoys organised by the military to minimise the risk of Boko Haram ambushes in rural areas.

The army has retaken much of the territory initially lost to the militants but Boko Haram still stages suicide bombing attacks and plants roadside bombs.

“We evacuated eight dead bodies and about 20 other injured persons,” said a rescue worker. A hospital official put the number of wounded at ten.

Boko Haram, which has pledged alliance to Islamic State, has killed about 15,000 people and displaced more than 2 million in its attempt to create a state adhering to strict Islamic laws.

It controlled a swathe of land in northeast Nigeria about the size of Belgium at the end of 2014 but was pushed out early last year by Nigerian troops, supported by soldiers from neighbouring countries: Niger, Cameroon and Chad.““““““““““““““““““““““““““