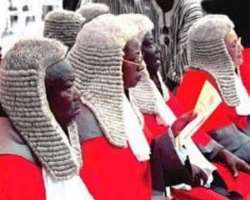 (Onitsha Nigeria, Monday, 10th of October 2016)---The last Friday’s late night invasion and abduction by the authorities of the DSS of some eminent Justices of the Supreme Court of Nigeria and the Court of Appeal as well as Judges of the Federal High Court did not come as a surprise to the leadership of International Society for Civil Liberties and the Rule of Law (Intersociety).

What surprise and sadden us till date are the ignoble roles of Nigeria’s leading CSOs and social egg-heads in setting the country’s democracy on fire leading to its present socio-political quandary (i.e. state of uncertainty) that has seemingly reached an intractable stage. The Nigeria’s mainstream CSOs of Southwest or Lagos extraction undeniably provided “the technical know-how” that brought a contraption called “the Buhari Administration” to the country. That contraption is best described as “demo-dictatorship” or dictatorship created through a ballot box. Dictatorship is not born but made!

In other words, the makers of dictatorship afflicting Nigeria today are the mainstream CSOs under reference. The referenced mainstream CSOs got their hands soiled and conscience mortgaged unpardonably to the extent that many of them have frustratingly adopted conspiracy of silence under the Buhari’s demo-dictatorship while others choose to speak defensively in favour of Buhari’s dictatorial policies and actions through behind the scene or third parties or in the open.

The rest have shamelessly come out boldly as “protagonists of dictatorship”. Attempts made of late by these conscienceless and shackled CSOs to regurgitate or reprobate have also failed and backfired on account of the fact that you cannot eat your cake and have it back. This is more so when their oilers know where and how to get them entrapped using EFCC and DSS, in the event they try to opt out of the inglorious and unholy agreement. It is clear to all and sundry that before their ignoble roles, the referenced CSOs were the soul and conscience of the country; voice of the voiceless and defenders of the defenceless!

It is therefore morally wrong and great disservice to our collective conscience to single out the immediate culprits (i.e. Buhari and DSS) in the senior judicial officers’ late night abduction saga, for condemnation, leaving behind those who created the “raging monster” (i.e. referenced mainstream CSOs). The former and the latter, particularly the latter, must be reminded of their “immortal sins” against the peoples of Nigeria, their liberties, Constitution and democracy and repudiated at all times. As abominable as the referenced DSS conduct is, it is about time we put the records straight and call spade a spade. Those who brought Nigeria and Nigerians into this suicidal state must be exposed and shamed at all times.

The raging regime atrocities of the Buhari Administration would not have found their roots in the history of the country again if Nigeria’s Mainstream Civil Society Community of Southwest or Lagos extraction; oiled by some of the country’s leading tainted personalities have not conspired to impose the present demo-dictatorship on Nigerians. It is extremely important, therefore, to remind all and sundry that the present demo-dictatorship ravaging Nigeria is as a result of conspiratorial roles of Lagos Politics, Nigerian Mainstream CSOS (i.e. rights groups, rights activists, activist lawyers, activist professors, activist professional bodies and industrial unions), Mainstream Print and Audio-Visual Media and a handful of leading online media.

It is therefore shocking and saddening that the messy situation that Nigeria finds itself today, which is getting messier day in day out, originates from the foregoing. It will forever remain an indisputable theory in the world of sciences that something can never be derived from nothing. For no matter how brilliant a first school leaving certificate holder or secondary school attendee is, he or she can never conduct academic teachings in the university; and no matter how spiritually gifted a first school leaving certificate holder pastor is, he or she can never climb beyond the first step of a ladder in the Christendom. Where academic discrepancies exist at the altar of leadership, it is either enslavement or conflict or both with end-product being quackery or neo-quackery.

In other way round, we ask: can a university professor, sensibly and scholarly, be politically fathered and taught by a FSLC holder or secondary school attendee? Is it correct to say that if the reverse is the case, such a professor is a professorial moron? What on earth would make a university professor to put him or herself in such professorially abominable situation; greed or power or both? Can anything good and creative come out of such irreconcilable union of a professor and a quack?

It is a truism that Nigeria of present political circumstances has been set back to over one hundred years as a country. The protagonists and promoters of Lagos virus Politics have indeed dealt Nigeria and Nigerians a heavy blow. Apart from conspiring to impose Gen Muhammadu Buhari and demo-dictatorship on Nigerians; they have also transformed themselves into institutions and voices of dictatorship and lawlessness and become toothless dogs; barking without biting.

It is no longer news that throughout the history of democracy in Nigeria, the DSS and its forefather: the NSO had never ceased to be the dark agent or number one enemy of democracy. Under the then NSO, Major Gen Muhammadu Buhari (as then was) extensively used it to scuttle the democratic process in late December 1983 and in 1984-85, he used it to violently hound and clamp scores of innocent citizens into months and years of detention without trial. Cases of disappearances and pre-trial/custodial killings and tortures; snowballing into unchecked regime atrocities were also rampant and untamed.

The DSS as a leading agent of dictatorship can never act atrociously alone. It is President Muhammadu Buhari personified. By Section 2 (a) of the Security Agencies Act of 1986 or Nigerian Security Agencies Act Cap 74 of 2004, DSS is directly answerable to the President and carries out its functions according to the whims and caprices of Mr. President. Its sinister operation code: “orders from above”, expressly means orders from President Muhammadu Buhari. Such orders include late night invasion and abduction of citizens in their sleep including Justices of Supreme Court and Court of Appeal and Judges of Federal High Court; long detention without trial of citizens and grievous assault and disrespect to institutions and symbols of authority such as Gubernatorial Seats of Akwa Ibom and Rivers States, etc.

The excuses given by the DSS concerning its latest macabre conducts under reference are judicially atrocious, statutorily indefensible and constitutionally coupist. As the Service has always done, it again overstepped its statutory bounds riotously and abominably and engaged in conducts clearly outside its Establishment Act and the 1999 Constitution. The Service seems to have earned notoriety in blackmail and criminal stigmatization. Its authorities have also customized and professionalized falsehood, blackmail and propaganda; trailing behind the likes of Mr. Lai Mohammed.

Just months ago, the Service, on the heels of wide condemnations trailing its invasion of the Akwa Ibom State Government House; addressed a similar press conference, claiming that it “recovered huge sums of money in local and foreign currencies worth millions of naira and millions of dollars kept in the Akwa Ibom State Government Guest House”. Till date nothing is heard of the bogus claims or whereabouts of the so called “recovered currencies”.

Others are: (7) When did the law establishing the DSS change from gathering, processing and managing internal intelligence to law enforcement, corruption fighting and late night burglary or invasion? (8) What is the ethnic composition of the serving senior judicial officers abducted in the dead of the night and in their sleep? (9)Are Nigerian serving judges now fleeing terrorists, insurrectionists or coupists, kidnappers and armed robbers warranting such macabre attacks at such blue law hours? (10) Are they being hunted and haunted for political persecution on account of discharging their constitutional duties without fear or favour? (9) Was their late night abduction geared towards intimidating and silencing them for standing up against lawlessness of the DSS? (10) Are they being hunted and haunted because they refused to allow DSS detainees to be arraigned after long period of unconstitutional detention without charge or asked to go and obey all the previous orders given but flouted with reckless abandon? (12) If the senior judicial officers were abducted late night for corruption charges, have they been formally invited by EFCC, ICPC or the NPF? (13) Who did they corrupt or who corrupted them?

It is time for every Nigerian citizen to stand up in firm condemnation and opposition to raging regime atrocities of the Buhari Administration. If the Buhari Administration and its atrocious DSS will have effrontery to indulge in such abominable acts against the respected and adorable Benchers, using corruption mantra, then we are doomed both as a people and as a country if they are not resisted and fought to a standstill.

This is also coming on the heels of our 11-page letter to the Attorney General of the Federation, Mr. Abubakar Malami, SAN, concerning similar macabre conducts of the DSS, where, till date, scores of unarmed and innocent Pro Biafra activists are held for over three months without trial. Comrades Chidiebere Onwudiwe and Justice O. Udeh, for instance, have been held by DSS for 108days and 88days respectively without known court remand, trial or bail; having been arrested on 22nd June and 13th July 2016 respectively.

We call upon all conscientious and courageous citizens of this country and members of the international community to rise in strong condemnation of the abominable attacks on the respected and adorable Benchers or serving senior judicial officers. We also call for their unconditional and immediate release as well as total overhauling of the DSS including purging of its headship.

As Nigerians, we must avoid keeping quiet concerning the raging regime atrocities and entrenched lawlessness in the country. We must collectively force the Buhari Administration to stick to the rule of law, constitutionalism, constitutional liberties and streamlined procedures and processes in its so called “fight against corruption”.

We must also be our brother’s keeper and learn, at all times, from the humanitarian blunders of the Second World War’sPastor Martin Niemoller (1892-1984) and his famous "First they came ..."; which is a famous statement and provocative poem of his about the cowardice of German intellectuals following the Nazi rise to power and the subsequent purging of their chosen targets, group after group, etc.

Board Chairman, International Society for Civil Liberties & the Rule of Law (INTERSOCIETY)