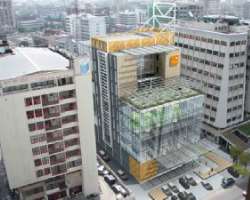 The grinding economic situation in the country has taken its toll on the Nigerian banking sector, as a stress test conducted by a Dubai-based international investment bank, Arqaam Capital, found seven Nigerian banks to be  undercapitalised to the tune of N1tn ($3.2bn).

The investment bank said the Nigeria's banking industry “is experiencing a full-blown financial crisis” as failed fiscal and monetary policies had led to a credit crunch.

It also reported that two other banks were close to being insolvent. Banks have been hard hit by the fall in oil price, with loan recovery declining greatly as business across sectors find it difficult to  stay afloat. Most of the seven banks had made huge loans to companies in the  oil sector, which have been unable to keep to loan repayment schedules.

Arqaam Capital emailed note on Monday, in which  analysts at the investment bank and brokerage, Jaap Meijer and Tarek Sleiman, said capital adequacy ratios in Nigerian banks were set to worsen because of the depreciation of the naira and huge non-performing loans, Bloomberg reported.

“Our acid test reveals seven undercapitalised banks” with a deficit of as much as N1tn ($3.2bn) in the financial system,” Meijer and Sleiman said.

“Unity Bank and Skye Bank are close to being insolvent, while lenders, FBN Holdings Plc and Sterling Bank Plc, will need a dilutive capital hike,” they added.

The affected banks reacted to the report on Monday, saying there was no iota of truth in the report.

However, spokesman for First Bank, Babatunde Lasaki, said, “First Bank is not undercapitalised. We are still within the industry regulatory threshold. This is their opinion. Our position has been published in our half-year report; it is not the one from an investment bank or a speculative report. Our Q3 report will soon be published.”

Also reacting, a spokesman for Diamond Bank, Ikechukwu Mike Omeife, said, “Our bank is strong. Our capital-adequacy ratio and non-performing loans are within the statutory requirements.”

A top source at the Unity Bank said the bank was still meeting its obligations.

The source, who did not want to be quoted, said, “Our financial position has been enhanced. We have just moved our head office to Lagos in order to be closer to the market and retail market. All these strategic investment decisions have shored up market confidence in the bank.”

Similarly, a top official of Skye Bank, who spoke on condition of anonymity, said the bank was not close to being insolvent.

The source said the Central Bank of Nigeria had issued a statement, stating that the bank was not distressed.

To create a capital buffer, Sterling Bank is planning to issue a N27bn bond and “if the interest rate looks better, we will do it this year,” the Sterling Bank Chief Financial Officer, Abubakar Suleiman, told Bloomberg.