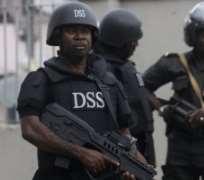 In what could be defined as a crack down on the judiciary, operatives of the‎ Department of State Service (DSS) on Friday night and in the early hours of Saturday invaded residences of some judges in Abuja, Port Harcourt and Gombe in a bid to arrest them.

The crack down was said to have began in Gombe State with the arrest of Justice Muazu Pindigi who presided over the Rivers State election tribunal‎.

It was gathered that the DSS Operatives between late Friday night and the early hours of Saturday also invaded the Abuja homes of two Supreme Court Justices, Walter Onnoghen and Sylvester Ngwuta.

Not done, the Nigerian Secret Police proceeded to the Abuja houses of two judges of the Federal High Court, Justices Adeniyi Ademola and Nnamdi Dimgba.

Justices Onoghen, who has been pencilled as next Chief Justice of Nigeria and second in rank to the incumbent CJN, and Ngwuta are neighbours at the Judicial Officers' Quarters in Abuja, while the Federal judges Ademola and Dimgba live in the Apo Legislative Quarters, Abuja.

Ademola was eventually arrested in the early hours of Saturday after several hours of siege at his home, while Dimgba's brother was said to have been assaulted by the operatives.

In Rivers, DSS operatives and policemen attempted to abduct a Federal High Court judge residing at Number 35 Forces Avenue in Port Harcourt in the early hours of Saturday.

The operatives of DSS reportedly rough-handled the state Governor, Nyesom Wike, and inflicted wound on his hand. A few of the operatives were alleged to have cocked their rifles and threatened to shoot the governor.

A statement issued by the Special Assistant to the Governor on Electronic Media, Simeon Nwakaudu, said the security operatives were irked by Wike's arrival at the scene shortly after the failed abduction process began.

It was learnt that Wike received security information on the illegal moves, minutes after the operation began. According to Nwakaudu, the security operatives blocked the entrance of the residence of the Federal High Court judge at about 1am on Saturday morning, claiming that they were acting on orders from above. As they dragged Governor Wike, they insisted that they must be allowed to leave with the judge.

However, the commotion attracted passers by and journalists who thronged the vicinity to know why scores of security agents in several patrol vans had been mobilised.

Upon the arrival of national media, the Rivers State Director of the DSS, Mr Tosin Ajayi, was said to have hurriedly left the scene.

However, addressng journalists, Rivers State Police Commissioner, Francis Odesanya, said the two security agencies were at the scene because they received privileged information.

Odesanya claimed he was at the scene as a peace maker. He declined comments on why the Police joined the DSS to invade a serving Federal High Court judge's residence.

In an interview with journalists at the scene of the failed arrest of the judge by the Police and DSS, Wike said it would not be under his watch that security agencies wiĺl be allowed to entrench needless impunity.

He declared that their reckless action portends danger to the nation's democracy, noting that he is convinced that President Buhari is not aware of the level of impunity being perpetrated by Federal Securiy agencies.

Wike stated that whatever the situation, the rule of law must prevail in a democratic setting.

He said if the security agencies had a lawful directive to implement, they must follow due process .

According to him: “Not under my watch wiĺl I allow this kind of impunity to take place. That is why we are here. I don't know which judge they were detailed to abduct. I didn't bother myself to know which judge. All I am interested in is that, at this level, it is not allowed.

“He is not a criminal and he is not an armed robber. If the person has committed an offence, invite him. It is only when he refuses to honour the invitation that you can adopt this commando style.

“The Commissioner of Police is here, the Director of DSS is here. Their operatives cocked their guns and threatened to shoot me. I have never seen that before. Again, this is to tell you what we are facing. We know that more will come. For us in this state, we shall continue to resist it.”

Wike added: “It doesn't matter what it will cost. When you talk about liberty, sacrifices must be made. We are not trying to stop an arrest. All we are saying is that things must be done decently and in line with the rule of law.

“Rivers State is under siege. For you to see a governor out at this time of the day, something is wrong. A siege is an understatement. If this type of thing happens next time, the people wiĺl resist it to the last”.

The governor stressed: “They are trying to do something funny in this state, probably to declare a state of emergency.‎”

The DSS has yet to confirm or deny the invasion and arrest at the time of this report.