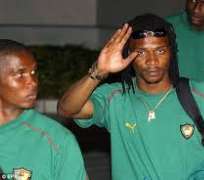 Song, one of the most recognizable faces in African soccer died at the age of 40.

He suffered a stroke on October 3 and was said to have been making a recovery. News of his death was confirmed on October 7, days after government officials in his homeland had given him the all-clear.

Cameron's health minister, Andre Mama Fouda, had on October 5 said after Song left the hospital where he was taken to for cerebral aneursym, 'He leaves conscious. His life is no longer in danger, but he is not out of the woods yet. We hope he gets well soon, and comes back in full form, as we know him to be.'

Another report on October 5 said Song had opened his eyes following his coma.

Former Cameroon team-mate Samuel Eto'o who earlier tweeted in French: 'I wish you courage and a speedy recovery big brother' later tweeted again after hearing the sad news again 'sad to hear the demise of my big brother, RIP'.

Song played 137 times for his country and had spells with English clubs Liverpool and West Ham.

He has been working as a coach for Cameroon's football federation following his departure as Chad coach.