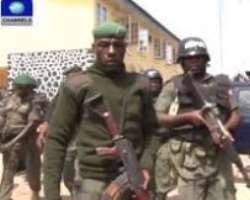 A former Vice Chancellor of the University of Ibadan, Prof. Olufemi Bamiro, was shot in Ibadan on Tuesday evening by gunmen in a failed kidnap attempt.

A top police source told NAN that the incident took place at Oluyole area of Ibadan. The victim was taken to the University College Hospital (UCH), Ibadan, for treatment.

The spokesman of the Oyo Police Command, Mr Adekunle Ajisebutu, confirmed the incident.

He said Bamiro was rescued by the prompt intervention of policemen from the Oluyole Division of the command who responded to a distress call.

Ajisebutu said the state Police Commissioner, Mr Sam Adegbuyi, has ordered the dispatch of the anti-kidnapping squad to go after the gunmen.

The police spokesman also said the former vice chancellor was shot on the right foot.

The Chief Medical Director of UCH, Prof. Temitope Alonge, who said he was in Abuja for a budget defence session, also confirmed receipt of the report.

“I am away in Abuja for budget defence and I was also informed of this unfortunate incident.

“The good news is that I am told that he is good spirits and that the injuries are minor,'' he said in a text message sent to a NAN correspondent.

Bamiro, a first class graduate, was a professor of Mechanical Engineering and former vice chancellor at the university.

Bamiro was the 10th vice chancellor of UI and a predecessor to the immediate past VC, Isaac Adewole, who is now the Minister of Health.

Cases of kidnapping are becoming rampant. The former Minister and her husband, abducted by armed gunmen along the Abuja-Kaduna Road.

Laurencia and Pius were kidnapped on Monday at about 7pm in Jere, Kagarko Local Government Area of Kaduna State.

They were said to be returning to Kaduna from Abuja when they ran into the hoodlums who blocked the Expressway.

The kidnappers have demanded a ransom of N10 million.