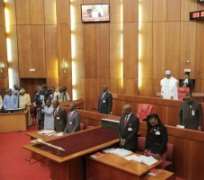 The National Assembly (NASS) has passed a motion to invite President Muhammadu Buhari to address the legislature on efforts being made by his administration on the current economic recession.

The Senate passed the motion on Thursday in concurrence with the House of Representatives.

The lawmakers explained that there was need for President Muhammadu Buhari to clarify the actual state of the economy, in view of alleged conflicting signals, coming from different officials of the administration, especially on the steps to getting Nigeria out of recession.

The House of Representatives had earlier said it is imperative that President Muhammadu Buhari addresses a joint session of the National Assembly to outline plans to pull Nigeria out of recession.

The lawmakers reached the resolution on Thursday after a debate that spanned two days at the floor of the lower chamber in Abuja, the nation's capital.

To indicate how important the situation was, the Minority Leader of the House, Toby Okechukwu as well as some other lawmakers, Leo Ogor and Oluwole Oke, outlined the factors they believe led to the recession.

Most of them identified the Treasury Single Account Policy, Foreign Exchange Policy and the structure of Nigeria as some of the issues that needed to be addressed.