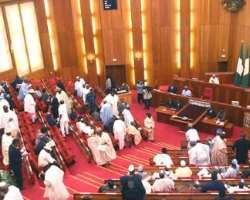 Senators, on Wednesday, shot down a bill seeking a special status for Lagos State, the former Nigerian capital.

There was drama at the end of the debate as some lawmakers staged a walkout following the rejection of the bill moved by Senator Oluremi Tinubu, which was seeking the passage of a bill to guarantee one per cent of federal allocations to Lagos as a special grant.

The grant, according to Senator Tinubu, would enable the state to handle the heavy burden of humanitarian challenge handed over to it as the nation's former capital.

To protest the rejected bill, some senators walked out of the chamber while the  chamber became rowdy.

It took the presiding Deputy Senate President, Ike Ekweremadu, close to 10 minutes before he could restore order to the chamber.

He hit the gavel severally and shouted 'Order' repeatedly and at a point stood on his seat before normalcy returned.

Incidentally, a similar bill was introduced to the Seventh Senate also by Tinubu, but equally did not sail through.

While leading the debate on the bill on Wednesday, Senator Tinubu said  it was targeted at uplifting the status of Lagos, being the commercial nerve of the country.

She said: 'As a city which caters for the welfare of residents and visitors, Lagos is placed under a huge strain that affects its infrastructure and as welfare implications for residents and transient citizens of other states in Nigeria. Many Nigerians travelling to Lagos experience traffic congestion because of pressures on the road.

Other problems faced in Lagos include overcrowding, emergence of slumps, over stretched healthcare facilities, decreased productivity because of hours lost in traffic and other environmental challenges.'

She added: 'The strategic importance of Lagos State is inherent in several sectors of the economy. Available statistics indicates that six out of 10 international passengers arrive in Lagos while eight out of 10 departs from Lagos. This shows that Lagos is the window through which visitors travelling in and out of Nigeria leave the country.

She stated that the bill aimed to remedy the myriads of problems faced by residents and visitors to Lagos by helping in alleviation of infrastructural challenges.

The senator also added that the bill was seeking to empower the Federal Government to make provisions for economic assistance through grants as provided for under Section 164 sub-section (1) of the 1999 Constitution as amended.

Other Lagos senators, including Senators Gbenga Ashafa and Solomon Olamilekan also spoke in favour of the bill by insisting that its benefits would rob off positively on all Nigerians.

According to Senator Olamilekan, the bill, if passed, will not only benefit the citizens of Lagos State, but the entire residents of the state, adding that the state was populated by indigenes of all the states of the federation.

Senator Sola Adeyeye, in his contribution, expanded the argument, saying Lagos should be entitled to 13 per cent of taxes and value added taxes collected from the state.

His comments that Abuja was a 'rotten pampered child' drew the ire of many senators as Senator Phillip Aduda rose to demand a withdrawal of the statement.

The bill was, however, rejected when Deputy Senate President, Ike Ekweremadu, who presided over the sitting, put the question to the Senate.