Rigobert Song Comes Out of Coma 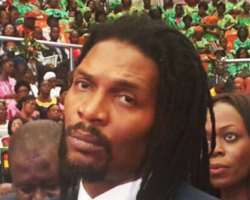 The former Cameroonian footballer and Chad national team head coach Rigobert Song who suffered a cerebral aneurysm(a stroke) and slipped into a coma on Sunday is now conscious and no longer in critical condition.

SEE ALSO: SONG SUFFERS A STROKE
The 40-year-old former Liverpool star is in a hospital in Yaoundé and his family has said that he is doing fine and breathing on his own.

Song who was at home in Yaoundé when he suffered his stroke has been flown to France yesterday for further treatment with the Cameroonian government covering his £78,000 medical bill.