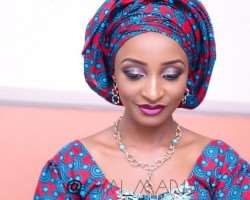 The actress who was named Best Kannywood actress for 2014 and 2015 was shown holding hands and talking with her onscreen lover in the music video titled ‘I Love You’.

She was banned from the industry on Monday as the video caused outrage among a conservative Muslim community which has constantly looked at Kannywood as a bad influence on young Muslims. Ramatu has issued an apology fo r featuring in the music video on Twitter as she said;

‘To those, I have offended in any way, shape or form and who I have caused any anxiety by featuring in the said music video, I sincerely apologize.’

‘Innocuous touching in my line of work is inevitable.’