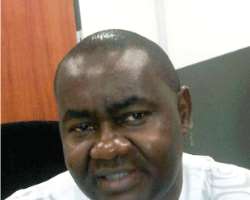 The Chairman of Rivers State Chapter of the Peoples Democratic Party, PDP¸ Bro Felix Obuah says rather than tread the lonely path of self adulation over the monumental fraud of abandoned contracts and embezzlement of the approved sums, Mr Magnus Abe should be bold enough to admit his guilt and return the looted funds to State coffers.

The State PDP Chairman notes with regret that Mr Abe, and Senatorial candidate of the All Progressives Congress, APC, for the Rivers South-East district appears not to appreciate the change mantra of their leader, President Muhammadu that fraudulent politicians should have a change of heart, return all stolen monies and turn a new leaf to help move the country forward.

According to Bro Obuah, documents and evidence of volumes of State contracts awarded to Mr Abe abound which monies were fully paid to him and abandoned afterwards.

Such contracts, he said, range from road constructions to building of schools and other infrastructure.

Though Mr Magnus Abe is not alone in this timorous trade of defrauding his own people to enrich self, it’s more honourable for him to return the embezzled sums to the State government or be prosecuted, the State PDP boss warned.

“Mr Abe should also hide his head in shame and apologize to Rivers people, the Ogoni people and his Gokana kinsmen for diverting and pocketing the huge sums of money meant for road constructions and renovation of schools among other social amenities in Ogoni land.

It’s common knowledge that this is the singular reason for his desperation for re-election into the National Assembly to serve as a cover even in the face of mass rejection by his people.

Let it also be known to him that whether in or out of office, the best option is to return such monies for unexecuted projects to government coffers. Failure to do so is more dangerous as the arm of the law is long enough to catch up with him and his like anywhere, any time”.