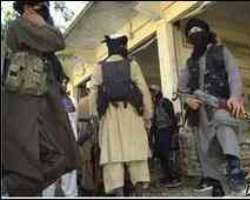 Guest columnist Ahmed Rashid on how Pakistan's long term counter insurgency strategy could begin to unravel as the Pakistani Taliban return with a vengeance.

Taliban fighters are moving back into Swat
The local Taliban are back in the seven tribal agencies that make up the Federal Administered Tribal Areas (Fata) and in Swat, where the Pakistani army has cleared militants with large-scale offensives.

In some areas those who fled the fighting have returned.

The situation in the region has once again become the focus of international attention – this time because of the recent failed car bomb attack in New York.

The alleged perpetrator, Faisal Shahzad, is reported to have trained with the Taliban in the Waziristan region.

Once again the Pakistani Taliban have begun to murder local leaders, intimidate the population, pose a risk to the security forces, prevent development projects and threaten wider violence.

Pakistan “lacks a coherent strategy” to deal with the Taliban

Send your views on the article
A suicide bomber killed five people in the Swat valley on 1 May, while in April at least six prominent tribal elders were killed outside their homes in the district capital, Mingora, and other towns.

Heavily-armed militants drive through villages on motorbikes to intimidate the population, burn down girls schools and threaten anyone co-operating with the army – often in plain sight of police or army sentries.

Comeback
Such tactics are well-known signs that the Taliban are preparing to make a dramatic comeback in Swat.

Maulana Fazlullah, the Pakistani Taliban leader there, is still alive and in hiding and could reappear at any moment.

Pakistan's army chief, Gen Ashfaq Kayani, has made several trips to the valley to assess the situation.

Swat and adjoining valleys were declared cleared of militants a year ago after heavy fighting and the deployment of some 50,000 troops.

The Pakistani army had claimed victory in Swat
And the militants also want revenge on the army.
According to Western and Pakistani officials, the army is holding some 2,500 suspected militants in indefinite detention, because the civil justice system cannot deal with them.

Many of the detainees are from Swat, where Human Rights Watch has also documented some 300 alleged extra-judicial killings by the military over the past year.

Meanwhile in the tribal agencies, the army has announced that it has cleared most areas of militants, with several offensives over the past 18 months.

However, thousands of fighters and their commanders have regrouped in North Waziristan, which the army has left alone.

Both claim to attack US forces across the border in Afghanistan but not the Pakistan army.

The US and Nato have urged the army to launch an offensive in North Waziristan but so far it has declined, saying it is over-stretched already.

All but two of some 30 drone missile strikes launched by the US so far this year have been aimed at North Waziristan .

It is here that Faisal Shahzad – who's accused of planting a car bomb to explode in New York last week – is alleged to have received his training in bomb making.

Over the past few months militants in North Waziristan have been infiltrating the other tribal areas and are launching dramatic attacks on army convoys and outposts, as well as suicide attacks and targeted killings of local elders who provide information to the army.

In one of the worst attacks militants ambushed an army convoy near Miranshah in North Waziristan on 23 April killing seven soldiers, wounding 25 and destroying six trucks.

In other attacks, convoys carrying oil and other goods for US bases in Afghanistan have been attacked. There has been fighting in Orakzai, South Waziristan and in the Bajaur tribal agencies.

The army is struggling to protect fragile supply lines from ambush

Groups resident there include Central Asians, Chechens, Arabs, Kashmiris and numerous Punjabi groups from southern Pakistan as well as the more regular Pakistani Taliban made up of Pashtun tribesmen.

The local Pakistani Taliban leader Hakimullah Mehsud, who was presumed killed on January in a drone strike, re-emerged last week alive and well, after apparently hiding out in North Waziristan.

There is increasing anarchy in North Waziristan as the authority of Haqqani and others seems to be ignored by the plethora of groups and splinter factions now operating there, especially the ruthless Punjabi militants.

The truth is that there is still no coherent counter-insurgency strategy or doctrine that by now should have been jointly formulated by the Pakistani army and civilian government and should be guiding their actions.

Limbo
In modern counter-insurgency warfare now being pursued by the US and Nato in Afghanistan, there is a phased ”clear, hold, build and transfer” strategy.

In Pakistan, the army works to clear an area of the insurgents and then hold it.

It is also conducting the reconstruction and never transfers the region to civilian authority. The army is not trained or equipped to carry out the latter two tasks.

In the tribal agencies and Swat the army is dealing with a quarter of a million internal refugees, humanitarian relief, reconstruction, administration, road building and maintaining the food supply lines along routes that are regularly ambushed by militants.

While the government has not offered to take over these civilian tasks, the army has yet to put together a plan to encourage the civilians to do so.

Hakimullah: alive and at large in North Waziristan

While Prime Minister Yousuf Gilani has handed over all internal security matters to Gen Kayani, the army has not constituted plans which would encourage civilians to work alongside it while the army offers them protection.

This leaves much of the population in limbo – they dislike the presence of the army but have no choice but to accept their help because there is no civil administration to look after them.

The deteriorating security in North Waziristan is now having a global impact and creating a vast and multi-faceted militant hub. Meanwhile other areas are on the verge of falling back into the hands of the Taliban.

Pakistan's civil and military need to formulate a coherent counter-insurgency strategy to provide security and an administration, so that development can reach the people and the militants can be isolated.

Without such a strategy, an ad hoc approach is leading to an ever-worsening security situation.