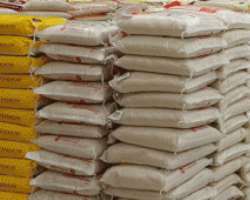 A large scale rice farmer in Asaba, Raymos Guanah, on Sunday observed that demand for locally-produced rice was on the increase.

Mr. Guanah, the Chief Executive Officer of Raymond Guanah Farms, Illah, near Asaba, told the News Agency of Nigeria in Asaba that such a positive development was heart-warming.

He said that local rice was now well processed and cheaper than imported one, hence the increase in demand.

“Nigerians are beginning to be more aware that there is so much difference between the locally-produced rice and the imported rice. Local rice is very nutritious.

“The rice we produced last year had been bought off and we have nothing left in stock,” he said.

Mr. Guanah, a former Commissioner for Lands in Delta, noted that one of the reasons for the increased patronage was because the rice processed in the farm contained no stone or sand.

He said, “because of the increased patronage in 2015, we are expanding our farm this year and this will result in more harvest at the end of this farming season.

“This year, we are expanding our cultivation to 600 hectares and the essence of this is to have more rice to sell.”

Mr. Guanah said that the multi-million Naira processing mill the State Government inaugurated in the farm in 2014 had the capacity to produce about 200 of 50 kg bags of rice per day.