POUND STRENGTHENS AGAINST US DOLLAR 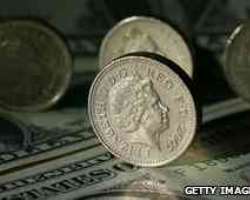 The pound has risen against the dollar and leading shares have jumped sharply despite continuing uncertainty about who will form the next UK government.

However, sterling fell sharply against the euro after European leaders agreed measures to try to stop the Greek debt crisis affecting other countries.

Last week's UK general election failed to give any party a clear majority.

The major parties have been holding talks to try to form a coalition government.

Reports of progress on the talks seem to have calmed investors' nerves for the time being.

Sharp falls
However, there are fears that if the process takes too long, the pound and share prices could be hit.

The main concern is that a weak government will not be able to pass measures to reduce the UK's budget deficit quickly.

The pound fell sharply against the dollar on Thursday – the day of the general election – and Friday.

It also fell heavily against the euro at the end of last week.

The political uncertainty also hit shares, with the FTSE 100 index losing 2.6% on Friday.

Emergency funding
The pound's fall against the euro on Monday had less to do with concerns about the political situation in the UK, and more to do with the measures agreed in Europe to tackle the Greek debt crisis, which threatens to engulf other highly-indebted nations.

Under the terms of the deal, the 16 members of the eurozone will have access to 440bn euros of loan guarantees and 60bn euros of emergency European Commission funding.

In addition, the International Monetary Fund (IMF) will also contribute up to 250bn euros.

On Friday, eurozone leaders approved an 110bn-euro loan package to Greece, which will be backed by the EU and IMF.