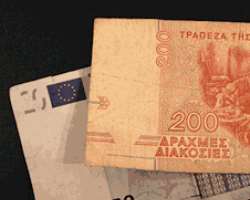 EU finance ministers have agreed on emergency measures worth 500bn euros (£430bn) to prevent the Greek debt crisis from affecting other countries.

The 16 members of the single currency bloc will have access to 440bn euros of loan guarantees and 60bn euros of emergency European Commission funding.

The International Monetary Fund (IMF) will also contribute up to 250bn euros.

Economic Affairs Commissioner Olli Rehn said the agreement proved “we shall defend the euro whatever it takes”.

There had been fears that without the measures, the euro might have come under pressure on markets as investors grew concerned about financially-troubled states such as Portugal and Spain. We are placing considerable sums in the interest of stability in Europe

Elena Salgado
Spanish Finance Minister
Check latest market data
Send us your comments
The euro has strengthened in early trading in the Far East, surging above $1.29.

On Friday, eurozone leaders approved an 110bn-euro loan package to Greece, which will be backed by the EU and IMF.

“The IMF will play its part, in the interests of the international community, in addressing the current challenges,” said IMF chief Dominique Strauss-Kahn in a statement.

Marathon talks
Speaking early on Monday after 11 hours of talks, Spanish Finance Minister Elena Salgado announced that an agreement had been reached on a package to defend the euro and eurozone economies. ANALYSIS

By Jonny Dymond
BBC News, Brussels
What was meant to be a two-hour meeting of finance ministers turned into an 11-hour negotiation.

The sums pledged are huge – enough to support the borrowing of several eurozone countries for a couple of years. And central banks around the world have launched what look like co-ordinated actions to assist financial stability.

So far, market reaction has been positive, but there will be demands for more detail about the bulk of the package – how the money will be raised, how quickly it might be made available and under what conditions it will be disbursed.

The UK has a very limited exposure to this package, and has not participated in the bulk of the deal.

Under the aid plan, the European Commission would make 60bn euros available to support member states experiencing “difficulties caused by exceptional circumstances beyond their control”, she said.

Ms Salgado said eurozone member states would “complement such resources through a Special Purpose Vehicle”, known as the European Financial Stabilisation Mechanism and worth 440bn euros, which they would guarantee on a pro-rota basis over a period of three years.

The IMF will contribute an additional sum of at least half of the EU's contribution to the SPV – a total of 250bn euros.

“It shows through this decision that we are placing considerable sums in the interest of stability in Europe.

The European Central Bank (ECB) also announced that it would buy eurozone government and private debt “to ensure depth and liquidity in those market segments which are dysfunctional”.

What went wrong in Greece?
Greece's economic reforms that led to it abandoning the drachma as its currency in favour of the euro in 2002 made it easier for the country to borrow money.

BACK
1 of 7
NEXT
In a statement, the bank said the scope of the purchases was yet to be determined, but that they would be offset by liquidity-absorbing operations so as not to affect the stance of monetary policy.

EU laws prevent the ECB from buying bonds directly from governments in the way the US Federal Reserve and Bank of England have done. It can get round the restriction by buying debt second-hand from banks.

“The fiscal efforts of the EU member states, the financial assistance by the commission and by the member states, actions taken today by the ECB prove we shall defend the euro whatever it takes,” said Mr Rehn.

The Federal Reserve later said it would re-open currency swap facilities with other major central banks “to help improve liquidity conditions in US dollar funding markets and to prevent the spread of strains to other markets and financial centres”.

In an interview with Russian media, US President Barack Obama said: “I am very concerned about what's happening in Europe. But I think it is an issue that the Europeans recognise is very serious.”