Economic Recession: All eyes On DMO 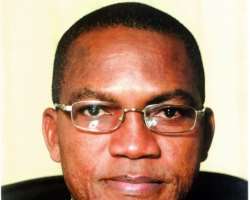 Goddy Egene reckons that as Nigeria prepares to borrow and inject more funds into the economy in order to move out of recession, the Debt Management Office (DMO) has the onerous task to ensure this succeeds

It is now official that the Nigerian economy is in recession and the federal government is in dire need for solutions to salvage the economy. Last week, President Muhammadu Buhari and his team met with economic experts and private sector operators as part of efforts to discuss steps being taken to get the economy out of recession. At the end of the meeting, one obvious thing that came out was that the government must spend to get out of the current bad economic situation.

Speaking on how to come out of the recession, the Managing Director/Chief Executive Officer of Financial Derivatives Company Limited (FDC), Mr. Bismarck Rewane, said for the federal government to overcome the economic recession, it must borrow and sell assets to raise funds that would be injected into the economy.

According to him, since there is a fall in oil revenue, the government has to increase the deficit plan for 2016.

'The government must inject funds into the system and the executive is fully engaged because they kwon they cannot hide they have to deal with the problem. And given the fall in oil revenue, you have to increase the deficit plan for the recovery. You must borrow and President Muhammadu Buhari has said we will borrow at least $5 billion externally. We must sell some assets because when you are in this kind of situation, you have to sell some assets,' Rewane said.

Government confirms more borrowing
The Minister of Budget and National Planning, Senator Udoma Udo Udoma last Friday confirmed that government would borrow more in foreign currency, disclosing that between $10 to $15 billion is being targeted.

'We are targeting to raise about $10 to $15 billion. We are looking for this because what we need to charge this economy is foreign currency. Foreign currency shortage is largely responsible for were we are today. So we have to look for foreign currency and we have a plan already. We have a prepared bill because we want to fast track some of these processes in order to get the money,' he explained.

According to him, the government has been able to spend one quarter of what it had intended to spend on capital projects, adding that the country recorded a N1trillion loss in the first half of the year due to the unrest in the Niger Delta.

Udoma said: 'The 2016 budget as far as the recurrent expenditure has been fully implemented. The emoluments have been paid in full. We have released all the money so that nobody at the federal level is being owed. All salaries have been released.

'We have also met all debt service in full. With regards to overheads, we have not met that in full, but we are almost there. The problem is capital expenditure. In the capital budget we planned to spend about N1.8 trillion but we have only spent about N400 billion.'

Before Udoma's disclosure, the Minister of Finance, Mrs. Kemi Adeosun had said the executive council had approved a three-year rolling external borrowing plan.

According to her, the loans would come from agencies such as the World Bank, African Development Bank, China Exim Bank, and other development agencies like the Japanese International Cooperation Agency (JICA)â€Ž.

She said the plan to borrow externally was in line with government's strategy to focus on concessional debts, low cost loans particularly from multi-lateral agenciesâ€Ž, noting that the loans would be applied to develop strategic sectors which government believed would â€Žhelp revive the economy.

She said the power sector would receive a significant amount of the loan to take care of projects militating against efficient power generation.

'The largest beneficiary of our borrowing is agriculture because it is equally strategic and we have programmes by the minister, some of which he inherited and is going to restructure and reform and some are new to the ministry. '

Adeosun emphasised that the economy must be diversified, saying, 'there are too many of us to keep on relying on oil. We can all see what happened at the output data of the oil and gas sector. What's happening in the Niger Delta has dragged down the GDP of the entire economy. We're too dependent on oil. We have to invest in capital projects.'

Onus on DMO
Having realised the need to borrow more, all eyes are now on the Debt Management Office (DMO), which has the mandate to borrow on behalf of the government and ensures efficient management of the country's debts.

Although there have been some criticism by some stakeholders on the level of the country's debts in recent times, some other stakeholders have said what the government actually needs is borrowing for capital expenditure and productive purposes as against for recurrent expenditure in the past.

The Director General of DMO, Dr. Abraham Nwankwo had that at below 20 per cent debt-to-gross domestic ratio, Nigeria is very much still in the comfort zone to borrow more. Also, another expert who believes Nigerian can still borrow for productive purposes is Mr. Odlim Enwegbara, a development economist. Comparing the debt-to-GDP ratio of some countries, Enwegbara said Japan's stands at 224 per cent; Italy's at 128.50 per cent; the United States at 107 per cent; France's at 95 per cent; the United Kingdom's at 89.80 per cent; South Africa 44 per cent; India's 66 per cent; Brazil's 60.8 per cent; Kenya's 50 per cent; Ghana's 67.50 per cent.

'With Nigeria at 17 per cent, the country has the opportunity to raise funds that are projects specific to fast-track the infrastructural development of the nation,' Enwegbara.

However, one big question that many would want to be answered is the capacity of DMO to successfully raise the funds that are needed to move the country out of the economic recession.

A financial market analyst, Femi Adelaja said given the track record of DMO and the commitment of the management of staff of the agency, raising the funds would not be a big problem.

'What I think we should be talking about is the efficient utilization of the funds by the government so that we won't repeat the mistakes of the past where funds were diverted from the original purposes for which they were borrowed,' Adelaja said.

DMO's track record
Having resuscitated the domestic bond market, DMO has also facilitated access to the international capital market (ICM) for Nigerian corporate players and government. That journey to the ICM began in 2011 when DMO issued $500 million Sovereign Eurobond in 2011.

This was followed with $1 billion dual-tranche Eurobonds in July 2013, thus creating benchmarks for corporate borrowers. In 2014, DMO issued FGN Bonds in Global Depository Note (GDN) format for the first time aimed at diversifying the investor base and attract foreign investors to the domestic securities market.

By December the country is expected to return to the ICM to begin the foreign capital raising exercise. Some analysts have expressed confidence that with the track record of the Nwankwo-led DMO, the economic potential, and the commitment of the government to return Nigeria back to its leading position in Africa, the country will have a successful capital raising exercise.