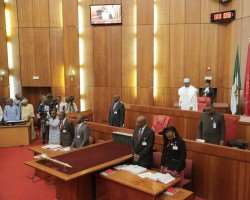 The Nigerian Senate, Tuesday rejected the calls for the sale of the country's national assets.

On its social media handle, the Senate said it 'rejected prayer 3 of the recommendations of the Ad Hoc Committee which sought for the sale of National Assets to shore up Foreign Reserve'. This was during the proceeding of Senate Plenary for Tuesday 27th of September 2016.'

Senate Leader, Ali Ndume stood vehemently against the sale of the assets even as other senators backed him. 'The senate oppose sale of National Assets to shore up Foreign Reserves'

The lawmakers called on President Muhammadu Buhari to, instead, submit an economic stimulus Bill to the National Assembly as a mater of urgency.

The senate said submitting such a package, which would contain fiscal stimulus packages, investments, and incentives, would enable the lawmakers to debate the quickest way out of the recession.

The ad hoc committee had recommended that the idea,  'being a sensitive issue, should be approached from a commitment to protecting the common patrimony of Nigerians by preventing the assets from falling into the hands of sharks, assets strippers and cannibalisers while also guarding against the fuelling of further inequities in the society and polity.'

The lawmakers also recommended that the executive arm of government must ensure constant meeting of fiscal and monetary authorities for harmonisation of policies, while working towards lowering of interest rates for genuine investors in the real sector,  medium and small scale farmers, as well as processors.

Another recommendation adopted by the Senate was that the Federal  Government should engage Niger Delta militants in 'meaningful and inclusive dialogue'  so as to avoid an escalation of the unrest in the area and ensure the protection of Nigeria's oil and gas assets, while boosting production and revenue.

The Senate asked the president to immediately appoint a Senior Special Assistant who would lead a team to include lawmakers from the zone in the peace effort.

Also, the Senate adopted the recommendation that the president should reconstitute the Board of Central Bank (CBN) and all other critical agencies of government to enable the bodies to operate within the law.

The lawmakers are also seeking an amendment of Section 162 of the 1999 Constitution to enable the Federal Government to save money for future use.

Following the adoption of the recommendations, Senate Chief  Whip, Senator Olusola Adeyeye, raised Order 43 of the Senate Standing Orders 2015 as amended to emphasise that the resolutions had become a 'Corporate Decision' of the Senate, having metamorphosed from the individual submissions made by senators last week, to resolutions of the Senate.

Senate to conduct hearing on INEC over inconclusive polls.