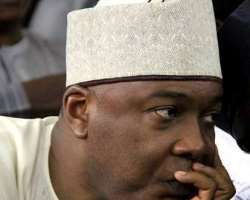 SAN FRANCISCO, September 27, (THEWILL) – The Nigerian Senate on Tuesday voted against the sale of the country's national assets. This was after the Senate Majority Leader, ‎Ali Ndume, moved a motion urging his colleagues to reject the proposal for the sale of the nation's assets.

Recall that the Senate President, Bukola Saraki, had, in a speech welcoming senators from their two-month annual recess , stated that, “The Executive must raise capital from asset sales and other sources to shore up foreign reserves. This will calm investors, discourage currency speculation and stabilize the economy. The measures should include part sale of NLNG Holdings; reduction of government share in upstream oil joint venture operations; sale of government stake in financial institutions e.g. Africa Finance Corporation; and the privatization and concession of major/regional airports and refineries.”

Speaking on the floor during plenary, the Senate Leader said, “I move that ‎the senate oppose the sale of national assets to shore up our reserves.”

When the Senate President, who presided over the session, put the motion to a voice vote, “the ayes had it”.

On its Twitter hand @NGRSenate, it was posted that the Upper Chamber “rejected prayer 3 of the recommendations of the Ad Hoc Committee which sought for the sale of National Assets to shore up Foreign Reserve”.

“The senate oppose sale of National Assets to shore up Foreign Reserves,” the tweet quoted Ndume as saying.