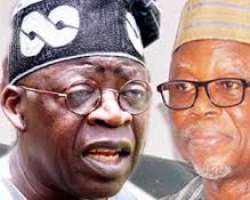 has demanded the resignation of the national chairman of the party, Chief

progressives.
In a stinking communiqué from his media office, Tinubu accused Oyegun of

investigations that showed that the delegates' list used had been tampered

with.
Tinubu in the communiqué further alleged that Oyegun's action in allegedly

subverting the will of the people was not of his doing, saying that for a

work.”
Tinubu who said that the APC was now under threat of being suffocated by

anti-democratic forces pretending to be progressives, said: “The APC, a

party born of the quest for democratic good governance, is under critical

threat by those who managed to be in the party but never of it. From the

party's inception, the principles of democratic fairness and justice were

to guide APC internal deliberations. Party founders realized that only by

intramural fair dealing could the party remain faithful to the progressive

ideals that we presented to the Nigerian electorate as our governing

creed. If the party could not justly govern itself, it would find it

difficult to establish and maintain just government throughout the nation.

“In essence, the party was the embodiment of a democratic promise made

between its members as well as a democratic vow made to the public.

Evidently, some errant members believe promises and vows are mere words to

these good pledges in a most overt and brazen display. In doing so, Oyegun

has dealt a heavy blow to the very party he professes to lead. It is an

awful parent who suffocates his own child for the sake of a few naira. The

levels. Because of Oyegun's conduct of our affairs, the party is rapidly

becoming an albatross to those it was meant to help.

“Oyegun's comportment regarding the Ondo State primary will become the

textbook definition of political treachery and malfeasance of the basest

order. In early September, the state primary was held. A purported winner

was named. Having faith in the ways of the party, Tinubu publicly accepted

what he assumed to be a verdict honestly derived. As a democrat, one must

grace as one would embrace victory. One of the few bright spots during the

conduct of the primaries was Jigawa Governor, Alhaji Mohammed Badaru

Abubakar. He chaired the primary convention with decorum and impartiality.

He was unaware that a tampered list had been slipped into the process.

“Indeed within hours of the announcement, news began to filter in that

gravely disturbed me. Credible allegations of fraud troubled the waters.

position to so do. The names of over 150 valid delegates were excised to

make room for an equal number of impostors. This was not a clerical error.

The alteration was wilfully executed that the primary would be directed

state party members. A cunning few had tried to deceive the many into

believing they were outnumbered.
“A conspiracy to steal the Ondo primary had been uncovered. Fortunately,

the grand deception afoot had been unable to cover its tracks fast enough.

established an investigative board to review the evidence. In a two to one

decision, the panel found the delegate roster had suffered tampering. The

delegate list. This recommendation was tabled before the National Working

Committee (NWC).
“After many hours of deliberations spanning several days, a final vote was

held by the NWC. Before hand, NWC members agreed that the decision of the

majority would become the stance of the party. Such is the way of

democracy. The NWC voted six against five to cancel the fraudulent results

and hold an honest primary. For a moment, it seemed the party would

restore its integrity by giving democracy a chance. However, those who

their enterprise.
“After the NWC vote, a noticeably agitated Chairman Oyegun proposed the

NWC engage in prayer before concluding the meeting. Adhering to this

chairman's request, NWC members began to pray. Seeing that the others had

himself from the meeting. Contravening the NWC decision and in violation

of all rules of fundamental decency, Oyegun decided to safeguard the fraud

done in Ondo by perpetrating a greater fraud. Oyegun arrogated to himself

of the party.
“Truth has finally come to light. There exists a regressive element in the

was founded. They joined the APC because it was the best ride available at

the time. Now they want to guide the party into the ditch. They want to

turn the party into a soulless entity incapable of doing good, just like

they are. When such a person tastes power, they shed all good restraint.

trust and not its mere custodians. These people did little to build the

party but now will do much to wreck it.
“Our party was to stand for change. Oyegun and his fellows seem to be on a

different wave length. They are the cohort of Unchange. The APC wants to

guide Nigeria into a better tomorrow. Oyegun and the cohort of unchange

were the old and new testaments of politics. They want the people to think

that there is no alternative to their reactionary system of skewed

politics and imperious government. Thus, they seek to turn the APC into a

factory of the very political malpractices the people soundly rejected in

the past election. To choke the APC in this manner is to kill the chance

for progressive reform for the foreseeable future. Much more than the Ondo

primary is at stake. Oyegun has revealed his team's game plan: It is the

destruction of progressive politics and governance on behalf of the

people.
“As party chairman, Oyegun was supposed to protect our internal processes

and be an impartial arbiter, a person in whom all had confidence. Instead,

he donned the garment of a confident man, duping the NWC, the party, and

INEC in one fell blow. He has robbed APC members in Ondo State of the

chance to pick in a fair manner who they believe is the best candidate.

“As such, he has broken faith with the party and probably has broken a few

laws. The consequences of what he has done are more expansive than a man

of his scope can fathom,” Tinubu said as he said that Oyegun must have

been under some major sinister influence as to allow what happened.

“With strong expectation, we await a response to Oyegun's wrongdoing from

Ondo primary.
“Leading into the primary, a prominent lawyer from Ondo published lengthy

primary. His letters spoke of his great love for democracy and justice.

Though Oyegun has assaulted democracy in a most public and vulgar way,

this lawyer's prolific pen will remain stilled. He dare not publish a word

about this travesty. His silence will be sign for all who care to decipher

its meaning.
“The plan was to point the accusing finger at Tinubu. With everyone

focused on Tinubu, they would have distracted all attention from the heist

they had set in motion. As fate would have it, the trickery they hoped to

conduct in the shadows has come to light.
“Those who so actively attributed imaginary wrong to Tinubu now stand dumb

and mute in the face of confirmed impropriety. They remain silent for

reasons they cannot divulge. Oyegun and his ilk turn out to be gangsters

adorned in the tunic of party authority.
“Oyegun has engaged in the strange math where five is greater than six.

downfall. Tinubu disparaged such malpractice when it was not in his party.

to fruition.
“Tinubu has consciously refused to hold any official position with the

sundry. Tinubu has even kept his peace for some time despite many things

that happened within the party that were not quite right. He exercised

this forbearance because the party is young. A collective endeavor cannot

avoid the mistakes and errors of organizational newness and evolution.

“Yet, the wrongs Oyegun committed had nothing to do with newness or the

mistakes occasioned by the path of reform. His actions are in the nature

of the old wrongs that have afflicted our national politics much too long.

If Oyegun wants to walk backward into the past, he has every right to it.

However, he has no right to drag the party or any of us with him. Against

our choosing.
“The informal title of national leader of the party was given to Tinubu at

recognize my contributions to the party's formation. It is an honorific

title which he has been proud to wear until today. I would rather not have

a party that says it honors me but that treats justice with indecency. I

respected.
“Oyegun has done the irredeemable. His coup is an insult to party and to

patriot, to reason and to the reform agenda of this government. To remain

many have labored to bring forth. While the forces resistant to change and

reform are strong, Tinubu dare not submit to them. Tinubu encourages all

party members not to submit to them. If we acquiesce in this wrong, the

one greater than this shall cascade upon us.
“Oyegun's transgressions are a warning. He is but the mercenary of forces

that seek to return the nation to the old ways. If they get away with this

infraction, no telling what or whom they will undermine tomorrow. Much is

at stake. On the chopping block, lies the future of the political party in

which the majority of voters had placed their confidence. To rescue the

party, Oyegun must go. He has shown that he and democratic fair play

cannot exist in the same party at the same time. If Tinubu is to choose

between John Oyegun and progress toward a better Nigeria, the choice has

Nigeria and its chance for a better tomorrow, now is the time to stand