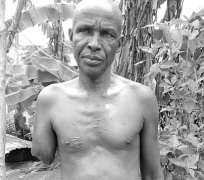 Delta State government has been warned by the people of Umuoje-agwu quarters, Issele-Azagba, to stay clear from their land as they have no land to give to the state government.

The eldest man of the community, Diokpa Festus Iloh, who expressed disappointment over the nefarious activities of the Delta State government to forcefully take their family and ancestral farm land, said it was unfair for the government to do so.

According the octogenarian who spoke through the Chairman, Committee on Land, Mr. Onochie Ijeh, told our correspondent that the farm lands and shrine located on the land in question had been in existence dated back to the 18th century.

“The land had never been in dispute until last three years when one Mr. Colins Afuwa from Ogwashi-uku came into the land and began to sell it rascally without the consent of the natives of Issele-Azagba”

When the people confronted him, he used his networks and the money he realised from the land deals to intimidate the people, unleashed mayhem and catastrophe on the Umuoje-agwu quarters of Issele-Azagba.

“His thugs came in their numbers with motor bikes into the farm lands where innocent farmers were working, brutalized them while another’s hand was amputated for no just course.

Some community youths, Uzor Azagba, Uzo Agbonor and Akwuisi who conducted journalists round the said land, where the ancestral shrine is located, also has economic crops and underground wells.

He said that the neighbouring Azagba-Ogwashi was a location were their maternal son, one James from Agidi-Esei in Ogwashi was given resided when he had problem with his paternal kindred.

According to him, “the Azagba-Ogwashi was originally called Ani- James. There were no express road (Benin/Asaba) those days, when government constructed the present Benin- Asaba express road in 1972 across the said family land with compensation.

He noted that the land which measures over 200 hectares by Delta State Ministry of Lands, until recently the agents of Mr. Collins ran into murky waters and the long hands of the law came over them for the first time.

The young boys in the community had never had peace due to the incessant attacks from his illegal patrol team who use motor bikes just as it was learnt that every effort Umuoje-agwu quarters made to stop the wicked invasion and destruction of properties failed as Mr. Colline Afuwa, was alleged to have bought the police in the area over.

“Recently, our youths met some Hilux Vehicles from the Ministry of Lands on the lands led by one Mr. Ukwuamedua, who told youths that the state government has acquired the land”.

“Today, we have resolved that the land belong to Umuoje-agwu quarters and their descendant, we do not have vacant land to give to the state government. If there will be acquisition, they must first come to us for negotiation. For now, the commissioner for Lands, Dan Okenyi and Senator Ifeanyi Okowa should stay away from our family land. Our land is not for sale”.

“We don’t know why the government want to forcefully take our lands but we are calling on all men of goodwill and the federal government as a matter of urgency to come to our aids because our youths and women have not been going to farm for fear of been killed”, he narrated.