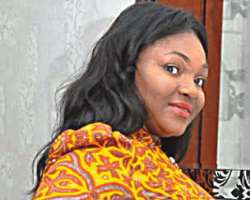 •Movie based on true- life story
•Woman involved attacks her
By BENJAMIN NJOKU
Chioma Okoye cuts the image of an easy-going actress, who has earnestly enjoyed a flourishing career devoid of controversy. But recently her hard-earned reputation was dragged through the mud, leaving the actress traumatized and gripped by fear.

Recall that Chioma said recently that she was attacked by a group of women led by a woman who claimed that the actress used her life story to make a movie that destroyed her marriage. The woman accused the actress of using her new movie to expose how her husband sexually harassed her under-aged daughter, his own step daughter to the point of getting her pregnant.

She allegedly sought Chioma's help as a film-maker to expose her unrepentant husband's evil deeds as she was tired of fighting him over it.

The movie titled, 'Lagos Men' centres around a man who was constantly having sexual intercourse with his step-daughter.

Showtime Celebrity, however, went after Chioma during the week to hear her own side of the story.

According to the actress, the woman in question approached her about three years ago and pleaded with her to help tell her story to the world through a movie. She relayed her pathetic story to the actress and pleaded with her to use it to make a movie.  After listening to her story, the actress agreed to do it but due to some reasons, it took her about three years for the movie to be produced and aired online. But trouble started recently after the actress released the movie on her online TV platform, where the woman's sister-in-law watched the movie from abroad and later, drew her husband's attention to it.

The husband was said to have threatened to throw the woman out of their matrimonial home, if the movie was not taken down within 24 hours. A threat that prompted the disenchanted woman to gang up with her friends and attacked the actress at her Lekki, Lagos residence. Chioma-Okoye

How the story began
Chioma narrates her story, “I was in my house with my friend, Ujunwa Okafor of blessed memory when one of her friends called her on the phone, and asked after me. She wanted to know if I was in town. We directed her on how to locate my home, and when she finally traced it, she told me a story of how her husband was sleeping with her daughter. She said she was looking for a pay back as she didn’t want to commit murder.”

“According to her, she wasn't observant enough to notice that her daughter was pregnant for her husband .Then, I asked her what she was doing about it, and she replied that she reported the matter to the General Overseer of their church, but he warned the man to mind his business. At the end, she told me she wanted to expose her husband by using the story to make a movie. I told her that I would not use his real name in the movie, but a similar name, which was what I did. When I finished writing the story, I shot the movie which is about three years now. I was looking for a better platform to showcase the movie,” she narrated.

How she was attacked, threatened
Recalling how she was attacked in her home, Chioma who started her acting career in 2002, after starring in the movie, “No Shaking” said, “On that Saturday morning, I heard a knock on my gate and when I opened it, I saw three flashy cars parked in front of my house. I was starring at the occupants of the cars in confusion, when one of them walked up to me and introduced herself as Oge, one of late Ujunwa's friends. I was still not convinced as I let them in and wanted to know their mission. But before I knew what was happening, the three ladies that accompanied her started wandering into my rooms.”

“I tried stopping them,when Mrs.(name withheld) frowned at me, fuming that she told me a story in confidence and I went ahead to use the story in my movie, using her husband's real name. At that point, I recognized her face. But I didn't use her husband's surname, anybody can answer Eze or Ify. I didn't know why it should become an issue. However, before I could say anything, one of the ladies slapped me and at that point, I slapped her back and we started fighting. Later, we went to the Ajah police station, where her police friend tried to cajole me to bring down the movie. He offered me about N3 million which I refused. That's where we are right now.”

Cost of taking the movie off the internet
Chioma who's currently gripped by fear, wondered why the woman in question is now spitting fire, threatening to deal with her after she had a mutual agreement with her to turn the story into a movie. She said, she spent about N9 million to produce the movie and would not accept anything less than the amount, before taking it down.

The curvy actress said, she has learnt her lessons, revealing that the woman's husband has since sent her packing because of the movie. “She's threatening that she will kill me. I spent a lot of money to make the movie and they are asking me to stop showing it on my platform. I am afraid of releasing the movie on DVD. Her husband's real name was used as one of the characters in the movie. I have learnt my lessons. I would have documented whatever agreement I reached with her,” she said.

The movie, “Lagos Men”, according to her, focuses on men, marital vows, secrets, scandals and more. She explained that the essence of turning the story into a movie was to help give the woman a voice and also to show what happens in the society with the hope of changing it.

Life as an actress, a producer
Meanwhile, explaining why her face has not been regular on screen in recent times, Chioma said, she wants to concentrate on producing movies alone. “I want to focus on my production so that I can bring a good product into the market. I cannot become an executive producer and at the same time an actress. It is one thing at a time. I don't want to be distracted as I want to focus on my production.”

Chioma, went down memory lane, recalling how her curves earned her, her first movie role. She described her journey into Nollywood as “amazing and rosy”, revealing that “I didn't initially want to go into the entertainment industry.”

But she changed her mind after featuring in her first movie, alongside her uncle, Pete Edochie who incidentally introduced her into the industry.

According to her, she attended an audition where the producer was in search of a plus-size chic who is endowed with a nice shape and curves. “The movie has to do with a village man who was in search of a true and curvy African woman for a wife. When I read the script, I immediately knew I was the right person for the role. During audition, I discovered nobody was as curvy and sexy as I was. And after the audition, I was selected for the role,”she narrated.

Chioma said, she delved into movie production because she wants to add value to the industry. She, however, regretted that most scriptwriters in Nollywood are not creative. “We have a lot of stories that we need to explore in Nigeria. But unfortunately, our scriptwriters are stereotyped. When it comes to comedy, it is one story-line of comedy until the comedy ceases, and when it is blood money movie, it is also , one story-line of blood money . They are not creative and that's one major challenge that we are facing in the industry, “she lamented