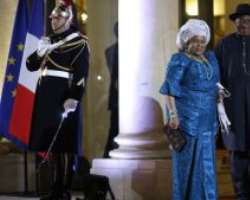 The Economic and Financial Crimes Commission has arranged a banker, the Corporate Affairs Commission (CAC) and 11 others as witnesses to testify against the  former First Lady Patience Jonathan on the case of $19m stashed away in Skye Bank accounts.

The Nation reports that the commission  has tightened security around the 13 witnesses ahead of the trial's resumption on September 27.

Dudafa and six others were last Thursday arraigned before a Federal High Court in Lagos.

A document attached to the charge sheet  indicates that 12 witnesses, including an account officer, will tell the court how the current and VISA Platinum Credit Card ( USD) accounts  were opened.

The identities of the13 witnesses are being shielded for security reasons.

It was learnt that some of them have been under pressure, especially the key Account Officer,  in the past few days.

A source, who spoke in confidence, said: “We are set for the trial on how the slush accounts were opened for the former First Lady. We have filed a list of  13 witnesses along with  our Proof of Evidence to show that we conducted due diligence.

“The Account Officer, who managed the slush funds, will tell the court the remittances into the accounts and how the ex-First Lady operated them.  I think Nigerians have not heard the last on these slush accounts. This is not a case of witchhunt.

“We have also taken adequate measures to protect all the witnesses in order to enable them to testify against encumbrances. We know some of the witnesses have been under pressure but we will ensure their safety.

“It is imperative to protect these witnesses because we have availed the defence their names in line with  the Administration of Criminal Justice Act. This may expose the witnesses to some risks which are being taking care of.”

The former First Lady is said to have sued the EFCC, demanding that her accounts be defrozen.

But the EFCC said:  “We are still investigating her and she cannot operate all these accounts until she is able to give the details of the sources of funds remitted into the accounts,” the source said, adding:

“Our findings showed that the remittances were products of gratification. It is left for her to prove otherwise.

“Already, the team which investigated the case has declared that she has a case to answer. But we need to dig more before determining her fate.”

The report of the investigative team said in part: “Investigation so far carried out has revealed that the four VISA Platinum USD Card accounts used by Mrs. Patience Jonathan  has a cumulative balance of $14,029.881.79 which has been swept Post No Debit Card category.

“Considering the above stated findings, we can safely conclude that a prima facie case of conspiracy to retain proceeds of unlawful activities, retention of the proceeds of unlawful activities, money laundering, contrary to Section 15(3) and 18(a) of the Money Laundering ( Prohibition) (Amendment) Act, 2012 and forgery contrary to Section 1(2) (c) of the Miscellaneous Offences Act,  Cap M17, Laws of the Federation, 2004 have been established against the aforementioned suspects.”

The EFCC claimed that all the funds traced to Mrs. Jonathan's accounts were proceeds of gratification.

The report said: “The intelligence revealed that Dr. Dudafa Waripamo-Owei Emmanuel fraudulently received various sums of money, being proceeds of gratification, and retained same on behalf of the then First Family and for himself .”