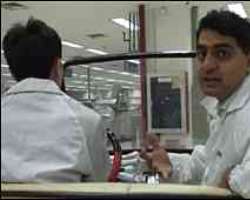 High up in the skyscraper that houses the ZTE company's headquarters in Shenzhen, southern China, I was treated to a rare “Charlie and the Chocolate Factory” moment.

The production line was deliberately placed in the corporate headquarters

Although it is not yet well known in the West, ZTE is one of China's new multinationals.

What confuses outsiders is that, like many Chinese firms, it has a background as a “state-owned enterprise”: a uniquely Chinese mix of the Communist government and the market.

These firms are part of China's hybrid model of “state capitalism”, which some fear is too unaccountable. They are under pressure to be more transparent, but I hadn't realised how literally they would take that at ZTE.

“Would you like to see the production line?” asked my tour guide Andy as we made our way through the display on corporate history.

I nodded, and he signalled to his colleague. Suddenly a golf cart pulled up next to us and I was told to get in.

An experience reminiscent of Roald Dahl's famous children's book, in which Willy Wonka leads a fantastical guided tour of the inner workings of his chocolate factory, was about to begin.

We drove off, straight over the posh office floor panels. We sped through a mysterious doorway and emerged, blinking, into a brightly lit room that held a specially constructed mini factory.

State roots
Instead of chocolate, of course, we saw microchips. A prim army of showcase workers in green overalls barely noticed us zip by as they assembled the microchips that go into mobile phones.

But the instant immersion in a film-set factory environment, just seconds after being in a corporate boardroom, was, in its way, as magical and bizarre as the children's tour.

I was told this fully operational product line had been moved into the office tower for “convenience,” designed so that visitors would not even have to leave the building.

We think ZTE is like a private company
Senior executive David Dai Shun
In its way, ZTE is like a Chinese version of Finland's Nokia or South Korea's Samsung in years gone by: you may not have heard of it today, but it could be a household name tomorrow.

The technology designed and manufactured by the Zhong xing Telecommunication Equipment company, to give it its full name, now sells in 140 countries.

Revenues jumped 36% this year, despite the recession.

And although the company is now publicly listed, it was started by a branch of the Communist state.

Back in 1985, its founder Hou Weigui was working as an engineer in a factory run by China's aerospace ministry in Shaanxi province.

The factory and other state-owned enterprises wanted to profit from the boom being unleashed by Chinese leader Deng Xiaoping's economic reforms, which began in southern China.

So they assigned Mr Hou to set up a small factory. The rest is history.

Speed
ZTE is at pains to emphasize that it has moved on from its state background.

“We want to be transparent, we want to be listed,” explained senior ZTE executive Mr David Dai Shun. “We think ZTE is like a private company.”

The firm is now also listed on the Hong Kong Stock Exchange, which means the market too has a say in what it does.

China's unique mix of the state and capitalism is, for many onlookers, one of the reasons it has grown so fast. LISTEN TO THE PROGRAMME

Or listen again via the BBC iPlayer
At the Boao Forum for Asia in tropical Hainan Island last month, business leaders and politicians gathered behind closed doors for a high-powered discussion of the country's future direction.

The state-owned enterprises and their future were hotly debated.

Outsiders praised some of what they do.
“China is faster in the execution,” said N Chandrasekharan, chief executive of Tata Consultancy Services, neighbouring India's biggest software firm.

“If they get an idea they just go after it immediately, because it's state driven.”

State capitalism is one reason China has been able to build so rapidly 30,000 miles of expressways and an infrastructure that dwarves that of other developing countries.

“The state-owned enterprises have dominated the building of infrastructure,” explained Xiang Bing, Dean of Cheung Kong Graduate School of Business in Beijing.

Pressure
The profits made by state companies can be rapidly ploughed into big government building projects.

The firms also contribute heavily to China's high savings rate which has helped the Beijing government to bail out Western countries in the financial crisis.

“But they do have a disadvantage,” said Professor Xiang. The curious mix of officialdom and business gives plenty of room for inefficiency, he said.

“You have this misallocation of resources, time and money.

“Maintaining a good relationship with the government may be more important for your success.”

This is one reason there is now so much pressure for these firms to be more transparent.

Another is the sheer power of China's growing economy. China's state-owned enterprises are now among world's largest companies, and foreign trading partners want to be reassured about what they represent.

These reassurances are definitely forthcoming from ZTE. The firm has been praised as a cutting edge example of how Chinese business is following international norms.

It was not just the golf-cart and the Willie Wonka-style magical mystery tour. After the drive was over, Mr David handed me reams of publicly available financial data.

“We will do everything the stock market requires, and that will make ZTE more transparent in its public image,” he says.