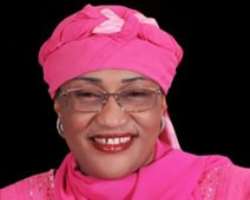 The Minister of Women Affairs and Social Development, Aisha Jumai Alhassan, on Tuesday slumped at the Internally Displaced

Alhassan was on  a two-day official visit to the state when she slumped shortly after presenting relief materials to the IDPs.

But the slump that could have led to a national tragedy was averted by the swift intervention of her aides and camp officials who administered first aid on her.

It was gathered that barely few minutes after walking into the hall with the aid of crutches, Alhassan, who recently had an operation for an undisclosed ailment, slumped.

She was immediately assisted by some of her aides who got a chair and helped her to sit down on it.

Her aides, particularly the women, used their wrappers, bucket and dustbin covers and whatever they could lay their hands on, to fan the ailing minister.

At this point, journalists who were already inside the hall, were ordered to leave the hall by her security aides.

A camp source told journalists that some bottles of Coca-Cola were given to the minister, which she reportedly drank 'to increase her blood sugar level.'

After she was stabilised, Alhassan was hurriedly driven out of the Fufore IDP camp to where she lodged to have a rest.

An unconfirmed source added that Alhassan while at the lodge used some of her medication and after a while went back to the camp to deliver President Muhammadu Buhari's message to the displaced persons and to inspect some of the relief materials the Federal Government provided for them.

It was gathered that the minister after she recovered from the unfortunate incident went into a hall in the camp where she addressed some women.

At the IDPs camp, the minister explained that she was on a fact-finding mission to the North-East as directed by President Buhari following allegations of human abuse in the IDPs camps of Adamawa, Borno and Yobe states.

Alhassan, however, promised the displaced persons that the Federal Government was working on modalities to ensure that they return to their homes as soon as possible.

She said, 'President Muhammadu Buhari sent me to you people because he is highly worried about your continued stay in IDPs camps and has given you every assurance that you will soon return to your kiths and kins.'

The minister had earlier paid a courtesy call on Governor Jibrilla Bindow in Government House, Yola where she urged him to continue to support women in his capital developmental strides.

She applauded Bindow for his tireless efforts aimed at developing the state. - Punch.