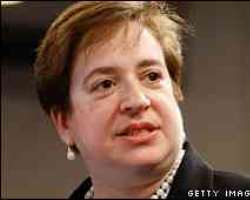 The White House has not yet commented, but Mr Obama is scheduled to announce his choice at 1000 (1400 GMT).

If confirmed, she would be the youngest member and the third woman on the court as well as the first justice in nearly four decades not to have been a judge.

The 50-year-old former dean of Harvard Law School has spent much of her professional life in academia.

Worked for Supreme Court Justice Thurgood Marshall
Served in the Clinton administration 1995-1999
Appointed Dean of Harvard Law School in 2003
Confirmed as US solicitor general March 2009
Early in her career she was a clerk for a US Court of Appeals judge and later for former Justice Thurgood Marshall. And like Mr Obama, she worked on the prestigious Harvard Law Review as a student.

The president was forced to choose a nominee due to the retirement of one of the Supreme Court's leading liberals, John Paul Stevens.

Non-ideological writings
The BBC's Richard Lister in Washington says that as solicitor-general, Ms Kagan is already well known and she went through a fairly smooth confirmation process in the Senate for her current job this year.

There had been speculation for some time that she was Mr Obama's preferred choice and her appointment would maintain the current political balance of the Supreme Court, he says.

The nine US Supreme Court justices are appointed for life

Why the nominee matters
Supreme Court contenders
Although regarded as a liberal on most issues, she has worked with conservatives and has even attracted a liberal backlash against her support for continuing Bush administration policies on state secrets and the use of military commissions to try terrorism suspects, our correspondent adds.

Her staunch advocacy of gay rights may concern Republicans, who have also expressed concerns about her lack of judicial experience. She would also be questioned as to whether she was qualified.

Ms Kagan's academic writings are largely non-ideological, and she would have no paper trail of judicial opinions available for scrutiny.

With 59 votes, Senate Democrats would have enough to confirm her, but they would be one short of being able to halt blocking or stalling tactics by any Republican senators. When she was confirmed as solicitor-general, only seven Republicans backed her.

Our correspondent says that selection of a Supreme Court justice gives a president the opportunity to influence US public life for decades, as the justices are not bound by term limits.