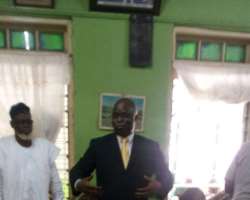 Prayers and condolences on the passing of the Chief of the Yoruba's of Ghana, late Muhammad Bashir Peregrino Brimah were held at the palace in Accra this Friday with many important guests passing through to offer prayers and kind words to the family of the late Chief.

Chief Muhammad Bashir Peregrino Brimah passed on in Accra in the early hours of Saturday, September 10th 2016 and was buried on Sunday, September 11th according to Muslim rights.

He was 83 years.
Chief Muhammad Bashir Brimah attended Odorogonno secondary school in Accra. He later studied law at Hull University in the United Kingdom, and also obtained a Masters degree at the American University (AU).

As a civil servant in Nigeria, he worked for the North Nigerian Legislative Assembly in Kaduna as Clerk-Assistant and Editor of the Hansard in 1964. He published several Hansard Booklets on Northern Nigeria Legislature which were presented to dignitaries including Heads of state to northern Nigeria by the premier of the north, Sir Ahmadu Bello, the Sardauna of Sokoto.

Chief Ambassador Brimah later transferred to the Ministry of External Affairs in Lagos. As a career diplomat Chief Brimah 's most important assignment was in Addis Ababa, Ethiopia, at the Nigerian Embassy, where he played many distinguishing roles as Minister-Counselor. He was a member of the Organization of African Unity (OAU) Commission of seven (7) on Sanctions against Apartheid South Africa which toured the Republic of Zambia, the Republic of Botswana, and the Republic of Lesotho in South Africa. He also served on the OAU Commission of fifteen (15) on Refugees in July 1980, which visited the Ogaden, the Ethiopian War Zone.

He retired voluntarily in 1984 with rank of a full minister (Ambassador). In 2008 he was appointed by the UN as Honorary adviser on African Human Rights and War Refugees.

Upon returning to Ghana, Ambassador Brimah was coronated Chief on the 12th of July 2009 at the Brimah Palace in Accra, his reign continued a 100-year legacy of peace and tranquility between the Yoruba community he presided over and the larger Ghana.

Chief Muhammad Brimah authored a history book, " the Migrant African Chief " which presented a record of the family's adventures across West Africa and its influential roles in the politics of Nigeria and Ghana.

Late Chief Muhammad Brimah was the seventh chief in the lineage of Chief Alhaji Ibrahima I, the son of the famous “Unknown Warrior” who migrated to Accra Ghana from Nigeria’s western coast in the mid 19th century. Chief Ibrahima I was given the sword of office and land to build his Palace by the then Accra Paramount Chief, His Royal Highness, the Ga Mantse, Nii (King) Tackie Tawiah due to his literacy, success, wide travel (as far as Mecca), wisdom and exemplary trade brilliance and social behavior. The Brimah chieftaincy was the first chair of the council of Muslim Chiefs in Ghana and also the head of the Zango “foreign residents” community in Accra.

Here is the video https://youtu.be/dzQ9cXNMfZU