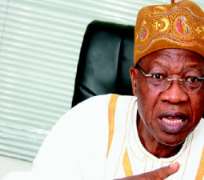 The Federal Government and the All Progressives Congress have berated the Peoples Democratic Party for demanding the resignation of President Muhammadu Buhari.

The Minister of Information and Culture, Alhaji Lai Mohammed, and the National Secretary of the party, Mai Mala Buni, in separate statements on Thursday, said the PDP was bent on returning Nigeria to 'years of looting.'

Mohammed,  in a statement on Thursday by his Special Adviser, Mr. Segun Adeyemi, said the PDP was shameless.

He described the   former ruling party as a shameless irritant, which was bent on distracting the government from its rescue mission and returning the country to ''Egypt.''

Mohammed stated, ''We are on a rescue mission to resuscitate Nigeria after the PDP left it in a coma, and the noise from the same PDP seems designed to sabotage the rescue efforts. But we are not deterred.'

The minister said if the PDP had understood the meaning of shame; it would not have dared to even make a single comment on the economy that it did everything to kill.

He added, ''While the PDP was emasculating Nigeria on all fronts, including social, economic and political, the rapacious party was deceiving Nigerians by giving them the illusion of growth and prosperity.

'Instead of showing remorse and rebuilding itself to a strong opposition party, the PDP has continued to blame the successor Buhari administration, which is left to pack their mess. The PDP undertakers have continued to engage in a blame game, when they should be hiding from the shame they brought upon themselves and the nation.'

Mohammed added that what the PDP had consistently put up as a vibrant economy under its watch was nothing but a bubble that was buoyed by massive corruption and chronic incompetence.

He stated, 'They keep saying we should stop talking of the past, yet the past will not stop rearing its head. They keep saying we should no longer refer to the past, but how can we forget so soon that our foreign exchange reserves plummeted from $62bn in 2008 to $30bn by 2015, at a time when oil prices were at a historic high, reaching a level of $114 per barrel in 2014.

'The candid truth is that we failed under the successive PDP administrations to save for the rainy day, and we need to constantly remind ourselves of that so that we won't repeat the mistake.

'Take the Excess Crude Account, which fell from about $9bn in 2007 to about $2bn in 2015; the argument that it was the state governors who depleted the account does not hold water since there were governors in place when the account was being built up.

'Worse still is the fact that up to $14bn in revenues from the Nigerian LNG remain unaccounted for, and indeed until the Buhari administration came to office, state governments never got any allocations from this source of fund which properly belongs to the Federation Account.

'The naked fact on the revenue front is that there was just a failure of leadership. This was compounded by the non-transparent uses of funds. We are all witnesses to the sacking of a Central Bank Governor because he raised the alarm about $20bn that had gone missing.

''We are indeed still trying to recover huge sums looted from the national treasury under the PDP's watch, with $15bn stolen from the defence sector alone. Perhaps most painful is that because of the way funds (about $322m) returned from Switzerland were mishandled, we now have to accept conditionalities before our stolen assets are even returned to us.'

Mohammed said one of the achievements that the PDP had been touting was that it reduced the nation's national debt.

'However, at the time that we were earning such large revenues from oil, we only managed to double our external debt from $5.6bn to $10.7bn between 2011 and 2015.  The case of domestic debt was even worse, almost tripling from N888bn to N2.1tn in the same period.

'Even these figures mask the extent of unpaid obligations to contractors and the huge plethora of uncompleted projects on which money continued to be spent without visible results. Payments to contractors stopped several years ago while not a single dollar was contributed to the Joint Venture activities. Over N4.5tn was spent on fuel subsidy in just two years under the PDP!'

On its part, the APC described the call by the PDP for Buhari's resignation as  ridiculous.

The national secretary of the party, in a statement in Abuja said the call was a desperate attempt by the PDP  to return Nigeria to the path of reckless fiscal policies.

The statement partly read, 'The PDP faction by its demand to return the country to the years where looting of the public treasury was the order of the day  has taken its orchestrated plot to deflect attention from the economic mess it left behind to new insensitive and shameless heights.

'Instead of this charade by the PDP, we advise the PDP leaders and their cronies to apologise to Nigerians and toe the path of honour by returning the public funds stolen under their watch.

'While the PDP attempts to fraudulently re-write history and misrepresent facts on its misrule of the country, Nigerians are traumatised on a daily basis on disclosures of the startling level of pillage of the country's commonwealth perpetuated under its watch.'