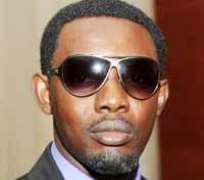 Nwokoye who plays the role of KOK's   daughter was in an unusual position as she was upbraided by his father, a rare occurrence in the sitcom. She incurred his anger for fraternizing with “ill-dressed” AY who made a cameo appearance in the episode dedicated to exposing indecent dressing in the society.

KOK who stars as moralistic Professor Johnbull was shocked to find his daughter in his son, Churchill's room with AY, who played the role of Dudus, a mobile cloth seller. He was wearing his trousers half way on his thighs in the name of the fashion craze called “sagging”.

“What I frown at, you should frown at”, he told Elizabeth who tried to explain she was attracted to AY and just loved his company. Her pleas to be allowed to “hang out” with him only elicited further rejection from her father.

“He is nothing but a common itinerant, nomadic cloth merchant. He is an irresponsible young man”. With that, the professor banished AY from his house. “I don't want to see him anywhere within 20 kilometres radius and circumference of my house,” he declared with the tone of finality.

“Please, he just wants to take me out. Let me convince myself that he is either good or not good for me. Please, please,” she begged the father.  Professor Johnbull later acceded to Elizabeth's request to go out on a dinner date with Dudus.

The outcome of the date proved the professor right in his stand that people are addressed the way they dress. Dudus was thoroughly embarrassed as he could not pay the bill, having lost his purse. His pleas fell on deaf ears as the restaurant attendant insisted on collecting her money, declaring she would not be fooled by AY's “what's up” antics.  Elizabeth returns home sobbing, confessing to her dad that she should have listened to his advice not to go out with somebody who dressed irresponsibly by exposing his underwear in the name of sagging.   She admitted that if Dudus had dressed decently to the restaurant, his story of his misplaced purse would have been believed.