US will not 'ever again” send ground troops to Iraq: Hilary Clinton 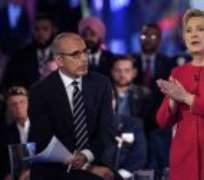 Hillary Clinton on Wednesday said she wouldn’t put ground troops in Iraq “ever again” and would not use boots on the ground to defeat ISIS .

Clinton’s remark came in response to a question from an Army veteran who asked the former secretary of state how she would determine when and where to deploy troops overseas, particularly when it comes to fighting ISIS.

“We have to squeeze them by continuing to support the Iraqi military . They’ve taken back Ramadi , Fallujah , they’ve got to hold them. They’ve got to now get into Mosul. We’re going to work to make sure that they have the support, they have special forces, as you know, they have enablers, they have surveillance intelligence, reconnaissance help.”