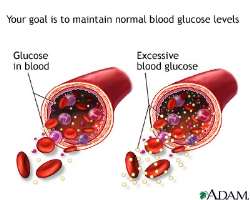 The combined presence of diabetes and hypertension in an individual is deadly indeed if not properly controlled. These two diseases are actually closely related and tend to lead to damage of the same organs in the body like the eyes, brain, heart and kidneys.

They quite often occur together in the same individual. When both are present in an individual they tend to cause more damage to the heart especially than when either alone is present. Where one is present in an individual you have to be on the lookout for the other one. Hypertension is twice more common in individuals with diabetes than in those without diabetes. Once a person with diabetes develops hypertension, damage to organs in the body is accelerated with an associated 4-5 fold increase in mortality.

The scientific basis for this close relationship has actually been clearly elucidated.

It is known that people with Type 2 diabetes who have a situation referred to as insulin resistance in which their body is not sensitive to insulin as it ought to be and thus consequently have to produce very large quantities of insulin to be able to keep the blood sugar under control are susceptible to developing hypertension because of the high levels of insulin in their blood referred to in medical parlance as hyperinsulinaemia. Also, people with diabetes because of the abnormal cholesterol levels and types they tend to have also develop what is called atherosclerosis which is hardening of the arteries which consequently leads to hypertension.

Another reason why these two diseases tend to occur together is because these diseases actually share some risk factors. In medicine, risk factors are certain features present in an individual or that an individual is exposed to that raises the risk of such a person developing certain diseases.

Risk factors common to diabetes and hypertension include being overweight and obese. People who are overweight or obese tend to develop insulin resistance. In the same vein, a person whose lifestyle is sedentary and barely exercises also tend to be insulin resistant leading to stiffness of the arteries and thus hypertension. Similarly, a diet with a high content of salt, refined sugars and unhealthy fats and oils is known to be a risk factor for these two diseases. It thus follows that people who take caution to make sure that these risk factors are not present in them have a reduced risk of developing diabetes and hypertension.

It is noteworthy that individuals who have a family member with diabetes or hypertension are also at risk of becoming hypertensive or diabetic themselves.

Individuals with these two diseases concurrently have a very high risk of developing stroke, kidney failure, heart attack, heart failure and blindness among other complications. It however has been clearly established that good blood pressure, blood cholesterol and blood sugar control reduces these risks considerably but not in totality.

Some genre of medication are a must use in people with this deadly combination. These include those called angiotensin receptor blockers, angiotensin converting enzyme inhibitors, statins and low dose aspirin among others. A combination of these agents with others with the goal of bringing the blood pressure to 130/80 mmHg and below in people with these diseases have proved beneficial. Hypertension should be controlled aggressively in people with diabetes as this will not only help to prevent but also to retard the rate of progression of kidney damage.

High blood pressure (hypertension) is often a 'silent' disease in that it may cause no symptom in its early stages and only becomes symptomatic most often when it has caused damage to vital organs of the body, hence people with diabetes and the other stated risk factors should have frequent blood pressure checks.

When the blood pressure is extremely high however, it can cause symptoms like headaches, visual blurring, nausea and vomiting, chest pain, shortness of breath, dizziness and convulsions.

People with and without diabetes are thus advised to reduce their risk of developing hypertension by maintaining a normal weight, reducing the salt content in their diet, exercising regularly, quitting smoking, consuming alcohol moderately, consuming a diet rich in fruits and vegetables and by managing their stressful situations well.

The proof is indubitable that eating salt minimally in the diet is associated with normal blood pressure levels.