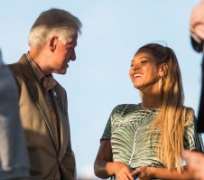 Something tells us this is one birthday Beyoncé won’t forget anytime soon.

As the singer celebrated her 35th birthday at the Budweiser Made in America festival in Philadelphia Sunday, the pop idol alongside Jay Z and some other famous pals, including Bill Clinton, had a fun filled day. Beyoncé's Birthday Gift To You Is This New Video
The “Formation” singer sported a green printed top, embellished jacket and distressed denim shorts to the music festival, which was founded by her rapper husband in 2012.

Backstage, Beyoncé, who is a longtime Hillary Clinton supporter, was spotted laughing as she chatted with Bill Clinton. The former president, 70, was also seen hanging out with Jay Z and Alex Ebert of Edward Sharpe and the Magnetic Zeros.

Later in the evening, Beyoncé and Jay Z watched some of the performances from the front row. Based on fan videos, the pop superstar seemed to really enjoy Coldplay's set. The “Hold Up” songstress was seen dancing and singing along to the band's hit “Hymn for the Weekend.” Beyoncé is close friends with Coldplay frontman, Chris Martin, and his ex-wife, Gwyneth Paltrow.